The New England Patriots continued to add to their 21 century lead in the pro football lineal championship, but they didn't have as good of a 2019 in the competition as the Baltimore Ravens, who won nine games. 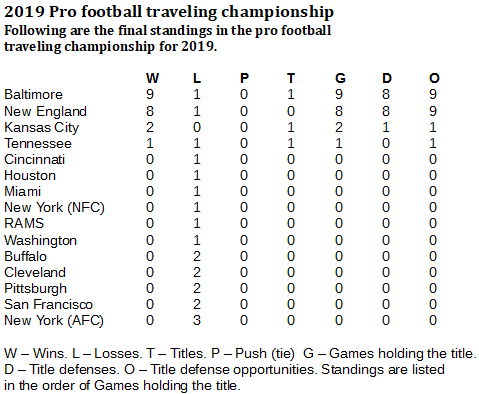 The 2019 season belonged to the Baltimore Ravens, so far as the league-wide lineal championship is concerned, and one might say it was about time.
But here's something the lineal championship tells us about timing: It isn't everything; winning is the rest.
It is no comfort to fans of the Cleveland Browns to notice that the Ravens are well on the winning side of the NFL during the 21st century, 190-130 in regular season games with 11 years of double-digit wins and two Super Bowl championships. But until 2019, the Ravens had little to say about the universal lineal championship in American professional football.
The Ravens lost their first five challenges, three times to the Pittsburgh Steelers and once each to the Green Bay Packers and the New England Patriots. None of these teams is a lay-up in this championship. Finally, in 2010, the Ravens broke through with their first title, finally defeating the Steelers on their fourth try. They held on for one game against the Denver Broncos before losing it to the Patriots.
The Ravens won a second traveler, taking it from the San Francisco 49ers in Super Bowl XLVII (deciding the 2012 champion). But they dropped it immediately to the Broncos to begin the 2013 season.
The Ravens took another lineal from Pittsburgh in 2018, but lost it a week later to the Cleveland Browns. So, their portfolio up until the 2019 season was nothing great, 4-9 in the 21st century.
Bleak were the prospects for taking the lineal from the all-powerful Patriots in an Oct. 27 skirmish over the Baltimore turf. The Patriots need no introduction, but we have this: the New Englanders entered that game with a 66-11 record in universal lineal games, including 10 championships, in the 21st century. No other two teams have that many wins put together.
The Ravens were ready this time. It was their third crack at the Patriots for this prize, and they won it with a 37-20 score. Then, a strange thing happened. The Ravens produced a defense that lasted longer than one or two games. They actually held onto the title eight times before succumbing at home to the Tennessee Titans in the AFC playoffs.
The Titans dropped the championship to the Kansas City Chiefs in the AFC Championship Game, then the Chiefs defended it with a 31-20 win against the San Francisco 49ers at the Super Bowl in Miami.
With their nine wins in 2019, the Ravens brought their all-time record to 13-10. That's still a long way from the Patriots, now 66-12. But everybody is way behind the Patriots. The Steelers are second all-time at 33-16. Next in wins are Denver (23), followed by the Packers and Indianapolis Colts (22), then the Rams (21).
Kansas City now is 17-9 all-time for the league-wide lineal. The Chiefs are tied with the Patriots for the longest active streak of successful title challenges across the league. Each team is on a run of six.
The Patriots' streak began with a 24-0 win at Indianapolis on Nov. 4, 2007. They last failed in a title challenge almost exactly a year earlier, on Nov. 5, 2006, in a 27-20 loss to the Colts in Foxboro.
The Chiefs' streak goes back to Nov. 6, 2005, when they snagged the universal from the Oakland Raiders with a 27-23 win in Kansas City. The last losing challenge for the Chiefs occured on Sept. 22, 2002, a 41-38 loss to the Patriots in Foxboro. It was the last of 11 straight title wins after the Patriots won it for the first time during the 2001 season.
On the Chiefs side, they successfully challenged the Packers and their all-time title streak of 14 games with a 19-14 win in Kansas City on Dec. 18. But the Chiefs dropped it right away, on their home field on Christmas to the Raiders, 16-13. One tries to imagine how bitter that must have been.
But it also kind of sums up the difference between the Patriots and the Chiefs in this history of this championship. All-time, the Chiefs are 8-2 as challengers and 9-7 as champions. The Patriots are 10-2 as challengers and 56-10 as champions. We might say the Patriots are roughly 5.6 times as effective at defending the championship (call it 5.5 if you want) because the Chiefs average about one defense per championship (1.125) and the Patriots average 5.6 defenses per championship.
That's how to climb the ladder in these standings, and the Patriots have set the top rung so high that no one else can see it. The Steelers had a chance to take the title from the Patriots in the 2019 opener at New England, but the Patriots ambushed them, 33-3. Last game of the season, the Steelers had a chance to take it from the Ravens, but it was another road test and Baltimore prevailed, 28-10.
The Steelers thus lost two chances to close the gap from their second-place position to the top position of the Patriots. Twenty years into the 21st century, the Patriots have the rest of the NFL lapped. 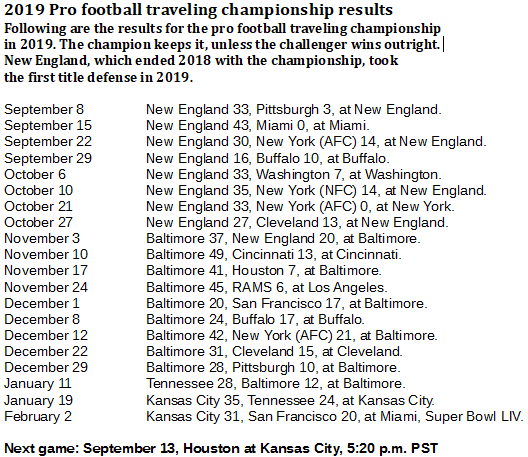