The Baltimore Ravens moved into contention for, uh, second-place in the 21st century AFC lineal championship in 2019. Of course, that still doesn't put them anywhere near the Patriots. 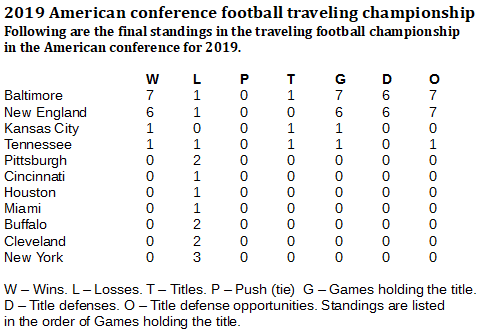 Will any team on the American side of the NFL surpass the New England Patriots for the lineal championship of the 21st century?
That question will be answered for future generations. For today's generations, it seems unlikely.
The Patriots added another six games of AFC lineal title to their traveling total in 2019, bringing their record in this championship chase to 61-16 since we began tracking with the start of the 2000 season. The Patriots brought the title into the season and held it for six games before falling, 37-20, on Nov. 3 at the Baltimore Ravens.
From there, the Ravens made the real news of 2019 in this title, defending it six times before losing at home, 28-12, to the Tennessee Titans in a playoff upset. Tennessee lost it the next week, 35-24, at the Kansas City Chiefs for the AFC championship.
Baltimore's streak brought it into the hunt for second place all-time for the AFC traveler. The Pittsburgh Steelers are 31-15 during tracking, followed by the Indianapolis Colts at 26-16 and, now, the Ravens at 26-20.
The Chiefs are 7-9 all-time with the small-market title, but they take it to the 2020 season. 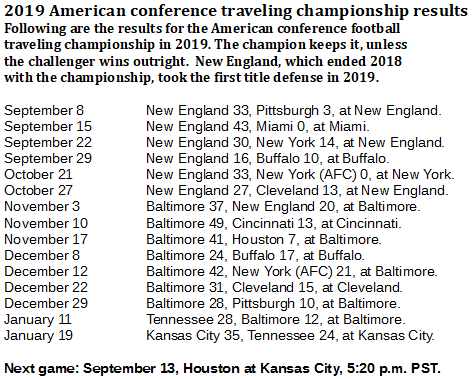