When tracking began for the lineal football championship in the Big 12 at the start of the 2015 season, Baylor was the league's top team. Since then, unquestionably, it's Oklahoma, at least in the traveler. 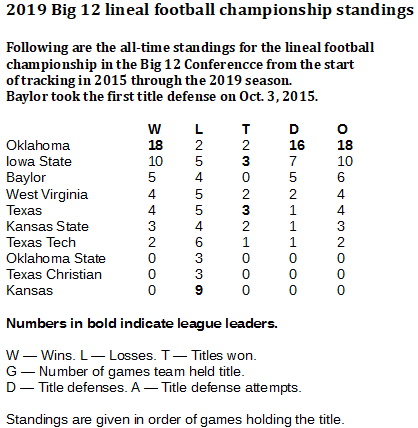 From the start of 2015 through 2019, Oklahoma's football team is 43-4 in the Big 12. It should come as no surprise, then that the Sooners lead the league standings in its lineal championship entering the 2020 season.

Entering the 2015 season, Baylor had won or shared two straight league titles, but a bomb sex scandal was begining to blow up during training camp and the coach who brought Baylor to the national picture, Art Briles, was deposed before the 2016 season. Baylor hasn't been the same, and that's part of what's happened with Oklahoma. Baylor, falling to one of its awful periodic moral lapses, dropped off the scene.

Baylor began 2015 as the caretaker as we launched this league lineal, and responded with wins in its first five conference games. But the smoke was starting to accumulate and Oklahoma applied a 44-24 crushing on the Bears in their own, new stadium, on Nov. 14, 2014. Baylor has failed to win in three title challenges since then.

So, the Sooners lead the all-time standings here with 18 wins. Iowa State, generally a middling team in the Big 12, is the surprise second-best team with 10 wins. Texas Christian has been surprisingly absent from this chase, losing its three challenges. 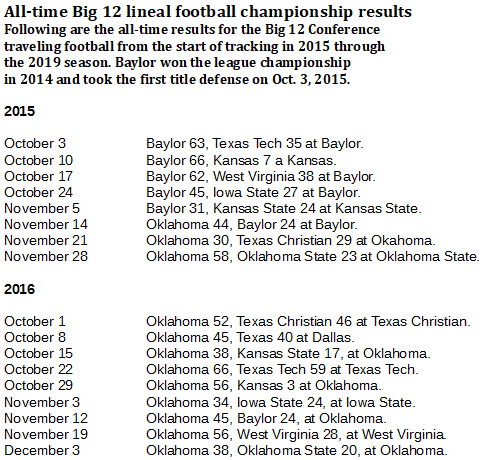 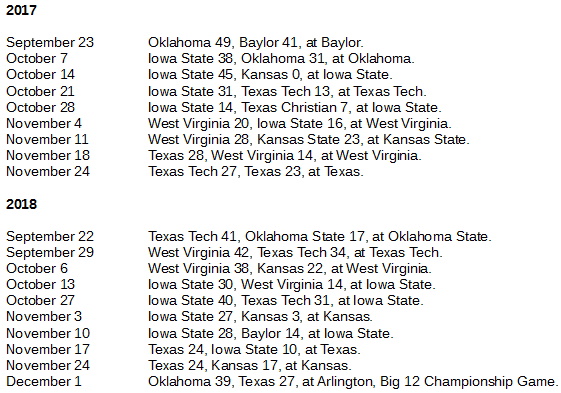