The lineal football championship in the American Athletic Conference (AAC) has belonged to Central Florida more than any other team in the last five years, but South Florida and Cincinnati are close behind. 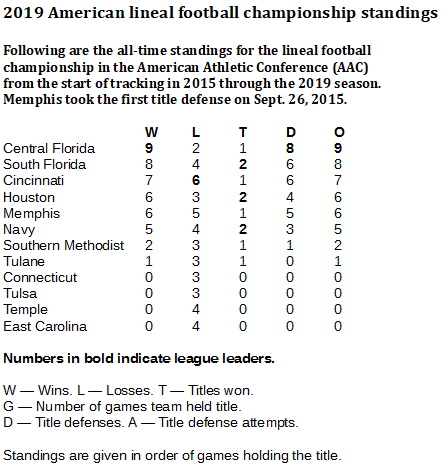 The lineal football championship across the American Conference has left off at the end of 2019 where it began in 2015 – with Memphis playing Cincinnati, and Memphis winning those games.

The tracking for all of these college football conference lineals began in 2015, with the idea of starting each one with that conference's defending champion. Easy enough in most cases, as most conferences have been playing conference championship games for a while.

But the American wasn't there yet in 2014, so the league ended in a three-way tie between Central Florida, Cincinnati and Memphis, all at 7-1. No obvious way of breaking the tie presented itself by considering head-to-head games. Central Florida played neither Cincinnati nor Memphis in 2014, but somehow lost to Connecticut. Memphis suffered its only loss against Houston. Cincinnati and Memphis played the only head-to-head amongst the co-champs, with Memphis winning.

Finally, we consulted the national rankings, figuring on breaking the tie that way. Here, there was no indecision. None of these teams appeared in the College Football Rankings that decided who went to playoffs, but Memphis finished 25th in the Associated Press Poll and the Coaches Poll. No other team in the league even received votes.

So, Memphis started this lineal game of tag as the "it" team, putting it on the line in its first conference game of 2015 ... which turned out to be against Cincinnati. So, all's well enough that ends well enough, and we'll say it begins well enough, too.

The game was tied, 46-46, with 2:22 left as Memphis took the ball from its own 20. The first three Memphis plays were pass completions by quarterback Paxton Lynch, gaining 60 yards to the UC 20 with 1:27 remaining. Lynch gave the ball to Sam Clay three times to cover the final 20 yards, giving the Tigers a 53-46 lead with 53 seconds left.

The Bearcats took over at their own 25 with 46 seconds left and their quarterback, Hayden Moore, came right out with three straight pass completions for 56 yards to the Memphis 19 with 10 seconds remaining. But Leonard Pegues intercepted Moore's final bid and Memphis succeeded in its first traveling title defense.

The Tigers would hang on three more times before losing the league lineal, 45-20, on their own field against Navy on Nov. 7. The years from 2015 were difficult in this championship for the Tigers, as they lost their next four challenges before no one other than the Bearcats brought the championship to Memphis on Nov. 29, 2019, the final game of the regular season.

This time, again, Memphis won, 34-24, actually winning the lineal for the first time. And this time, unlike the end of 2014, the American held a championship game. It was Cincinnati at Memphis. Again, the Tigers won, 29-24, and they hold the championship entering 2020.

The American Athletic Conference began in 2013. The league has never produced a better team, a more highly acclaimed team nationally or a more dominant team than the Central Florida outfit that stomped through in 2017 and 2018. The Knights won 25 straight games over those two seasons, including 16 straight in the league. They finished 2017 13-0 overall, ranked sixth by the AP, the highest any league team has ever finished in that poll.

In 2018, UCF won its first 12 games before finally succumbing to Louisiana State, 40-32, in the Fiesta Bowl. Considering that LSU went on to win the national championship in 2019, that's not bad for a first loss in two years. UCF won its American opener in 2019 before losing to Cincinnati, 27-24, at Nippert Stadium on Oct. 4.

That loss ended a nine-game run of league lineal title for the Knights. They picked it up halfway into their 17-game league winning streak with a 48-20 home-field win against Southern Methodist on Oct. 6, 2018, and held it for nearly a year before losing it to UC. But the nine wins are enough to keep UCF at the top of the all-time standings in this league.

Cincinnati won it for the first time with that result against Central Florida. The Bearcats had lost their first four title challenges before toppling the Knights, but they held it here for another six games of the league season before losing at the end of the year at Memphis. Twice, as it turned out.

Second on the all-time ladder here is South Florida, one of the original triumvirate of 2014 co-champions who, by the schedule, fell from the mix when it was decided to begin the championship with Memphis. Five years in, South Florida is ahead of Memphis and Cincinnati, holding eight games of title. 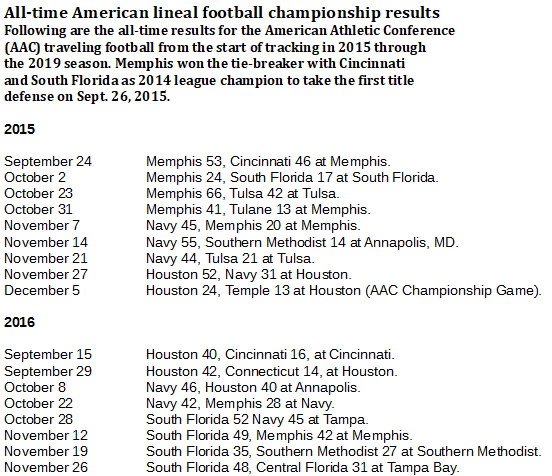 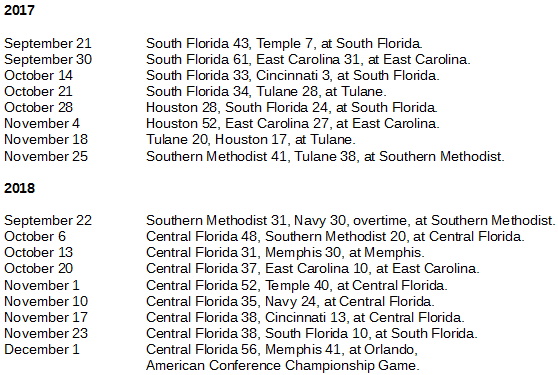