PSV Eindhoven remains, by far, the leading soccer club in four years of the Dutch traveling championship, but traditional power Ajax Amsterdam made a serious move with the title in 2019-20. 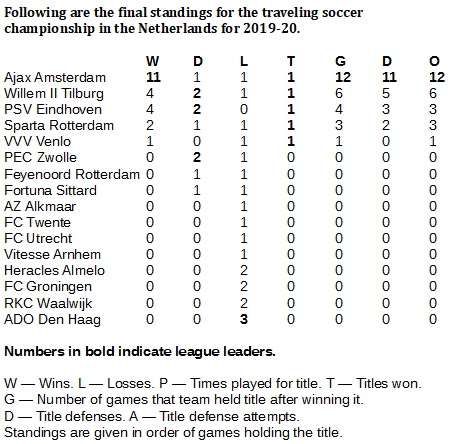 Ajax Amsterdam finally broke through with a big year in the Dutch traveling soccer championship, producing 12 games of title during the 2019-20 Erdivisie season to lead all clubs.
Ajax won the title on the first of September with a 4-1 win at Sparta Rotterdam and held it until a 2-0 loss on Dec. 6 against Willem II Tilburg. It was Tilburg's first traveling title after failing eight times in the first three years of tracking.
Tilburg held its first championship for six games before falling, 3-0, at PSV Eindhoven on Feb. 8. The Eindhoven squad produced five games of defense before the remainder of the season was canceled in March because of the coronavirus pandemic.
With its wins, Ajax moved its all-time championship total up to 21 games, moving up to second place historically in Holland. Feyenoord Rotterdam, which began the season in second place with 19 games of title, failed in two challenges during the season and now is in third with 19 games of title.
The leader, now and, it seems, always, is PSV Eindhoven, which opened the year with 35 games of title and ended it with six more for an all-time total of 41. 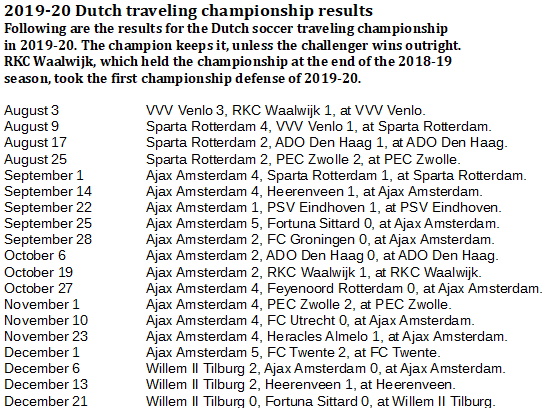