Auburn roars toward the top in men's basketball short lineal

Auburn added one more game to it's season-leading performance in the short traveler through men's college basketball, finishing 2019-20 with 14 games. The Tigers now are second place all-time behind UCLA, which has 17. 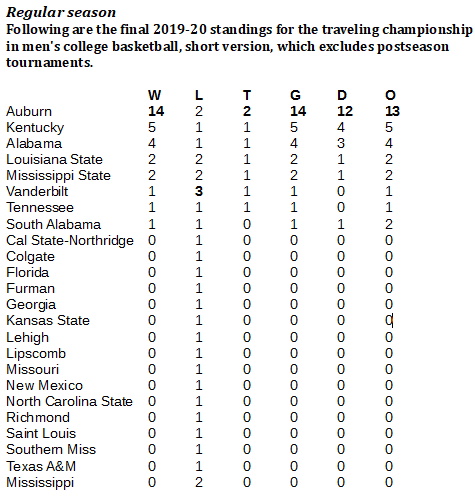 Other than the coronavirus, you'd have to say the 2019-20 men's basketball season went pretty well for Auburn.
The Tigers were, after all, coming off a trip to the national semifinals and a 30-10 finish, then they were 25-6 in 2019-20 when play was ended, having risen as high as fourth in the basketball writers' poll. We'll simply never know what the Tigers could have accomplished in 2019-20.
Come to think of it, we'll never know how far Kentucky could have gone, either. The Wildcats actually won the Southeastern Conference, finishing a game ahead of Auburn. The Cats clinched that championship on Feb. 29, a 73-66 win against Auburn that also returned the short version of the men's college basketball lineal to Lexington.
With that win, the Cats had a chance to move up in the all-time standings, but they immediately lost to Tennessee, which then lost the title right back to Auburn on the final day of the regular season.
With that Auburn finished the season with 14 games of lineal championship in the short version, the most of any team. Kentucky, with five games, was second, followed by Alabama with four.
Auburn moved up to second place in the all-time standings with its 14 wins, trailing only UCLA, which has 17. North Carolina is third with 11 wins, followed by Kentucky and Xavier, each with 10. 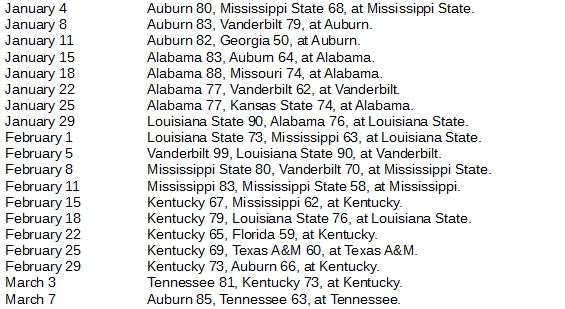