The New Zealand soccer club Auckland City, easily the best in New Zealand, also is the best in Oceania over time. In the short time that we've run a traveling soccer championship through Oceana, two years, Auckland City has held it for 35 of 49 games. 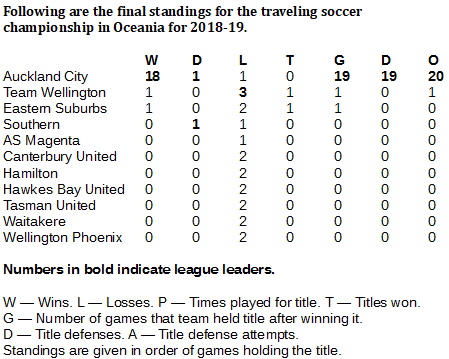 The Oceanian traveling soccer championship is one of the less interesting entries on these pages.

Oceania is especially a marketplace backwater by FIFA geography, which includes Australia in Asia. Can't blame the Aussies. They're too big for Oceania.

Without Australia, Oceania is New Zealand and hundreds of smaller islands. In essence, for club soccer purposes, anyway, it's Auckland City.

We began this Oceanian traveling title in 2017-18 by placing it in the care of Auckland City, perennially the top club in the New Zealand Football Championship. Almost as if to mock us, the perennials dropped the title immediately. And it probably was for the best.

Many other teams got to play for this championship, and win it, before Auckland City took it back in January 2018 and held it for the rest of the season, 16 straight defenses, including the final two against New Zealand rival Team Wellington in the Oceanian Champions League.

So, Auckland City brought the title into 2018-19 and held it for the first 19 games of the season, finally falling to Team Wellington on March 24.

Two years in, Auckland City has 36 games of championship. Canterbury United and Eastern Suburbs are tied for second place with four games, followed by Southern United with three, Team Wellington with two and Hawkes Bay United with one. 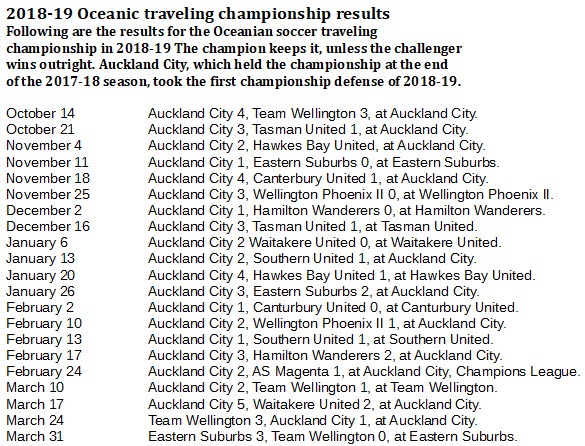