The reason for running the newly-named Super League is simple. Every year, baseball contenders emerge from all over the pyramid. The Super League gives us a better chance to put those clubs in top competition. 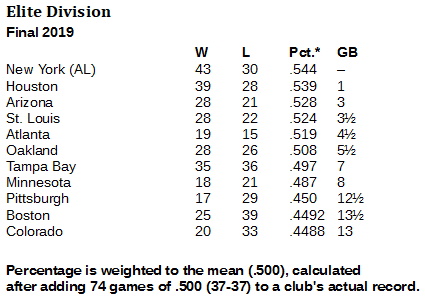 The Elite Division made its first run in 2019, and if we're just looking at the top of the standings, it looks like the First Division. The New York Yankees won it, finishing one game ahead of the Houston Astros.

One reason for having an Elite Division – oops! First, this: We're changing the name of the Elite Division to the Super League, in honor of the public, legislative and media outrage that destroyed a plan by American sports conglomerates to monopolize European soccer earlier this year. A group of the leading English clubs owned by American magnates attempted to corral elite clubs from France, Germany, Italy and Spain into a permanent franchise arrangement, the like of which has made their American franchises increasingly valuable. It also would have wrecked the professional pyramids in each of these nations. It was to be called the Super League. But it was not to be.

Good name, though, and it suits our purposes here, so we'll use Super League instead of Elite Division across the sports where we have them, which are the North American versions of pro baseball, pro basketball, pro hockey and pro soccer.

All right, then, why do it? The Super League. Why do it? Just to see. What the hell?

We've been running the pyramids in baseball for 10 years through 2019, and there is a strong sense in which the pyramids rightly render the relative strengths of the teams through the game. It could be a lot better, but it would take a change in the schedule, rather than the structure, and we only control the structure. And the structure is simple. Eight teams each in the first three divisions and six in the fourth. At the end of the season, the top two in each division go up and the bottom two go down.

We started it in 2010. At the end of every year, the top two go up and the bottom two go down. And it has worked out that, if we use Major League playoff berths as a measure, then, year by year, the First Division is the best division, the Second Division is the second best, etc.

Seems about right. The difference between the top and bottom in Major League Baseball is not large, so you wouldn't expect the top division to monopolize the playoff bids. But you would expect a strong plurality, and this is what we have here.

One big difference between a pyramid and the permanent franchise system, as this exercise illustrates, is that teams can and do rise faster without the pyramid. There is no such thing as going from worst to first in the pyramid because any team in the Fourth Division is at least three years from joining the First Division, let alone winning it.

Reaching and remaining in the First Division takes years of sustained excellence, and there aren't a lot of clubs with the resources for it. Especially for smaller market teams, the game is to build quickly and take your shot before the players get too expensive. One can track the trajectory of any small market club through 10 years of the pyramid and see abrupt rises and falls. That's just how a lot of these teams have to play it. And it means we can expect to see premium short-run teams below the First Division.

Seeing it happen that a Third Division champion is better than the sixth-place team in the First Division, we formed an over-arching division that takes in the leading finishers from each division the previous year. Thus, the Super League includes the top half of the previous year's First Division, the top three from the Second Division, the top two from the Third and the champion from the Fourth.