While Bayern Munich dominates the Bundesliga, winning it for the eighth straight time in 2019-20, the Southern squad has faltered during the last two years of the traveling championship. Now, Borussia Dortmund is the all-time leader in Germany. 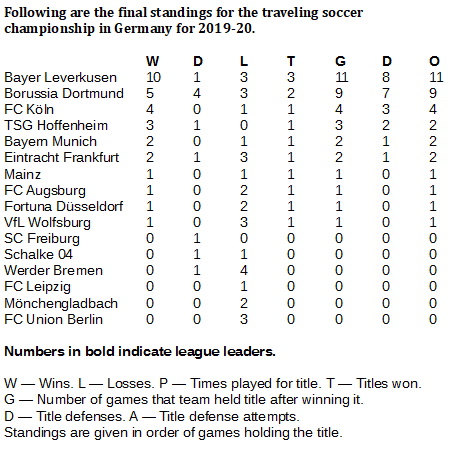 The two big winners in the German traveling soccer championship for 2019-20 were Borussia Dortmund and Bayer Leverkusen.
Dortmund is forever the second fiddle while Bayern Munich dominates the Bundesliga every year. But the Bavarians, 30-6-4 with three championships in three years of tracking through May 5, 2018, are since then only 2-3-2 playing for the German traveling title.
Meanwhile, Dortmund, a steady hand in this chase through the years, tacked up another nine games of title in 2019-20, compared with only two games of title for Bayern. With that, Dortmund now is the all-time leader in Germany with 39 games of traveling championship, compared with 36 games for the Munich side.
Dortmund finished second in the 2019-20 chase to Leverkusen, which won three titles and held them for a total of 11 games. Leverkusen's longest championship, a seven-game affair, bridged the Bundesliga's two-month hold time for the coronavirus.
With its 11 games of title in 2019-20, Leverkusen moved up to third all-time in the German standings at 19 games. Leipzig now is fourth at 17 and Werder Bremen, with 13, is in fifth place.
Bremen ended the 2018-19 season with the championship and started 2019-20 with a chance to expand its total, but dropped the title, 3-1, at home to Fortuna Düsseldorf in the season opener. A week later, Leverkusen won at home against Düsseldorf for its first title of the season. 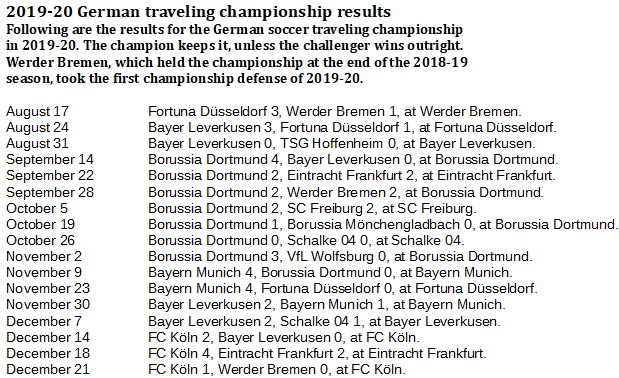 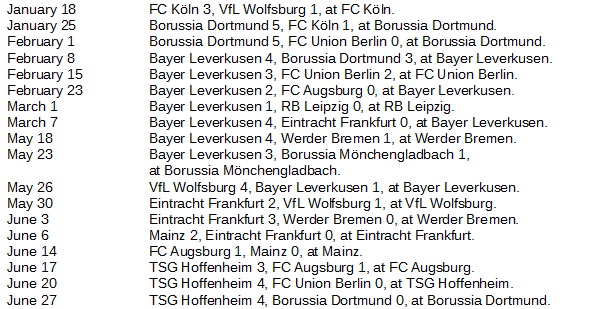