In Gaelic football, 2020 began and ended with Dublin holding the lineal championship. In between, the title changed hands seven times. 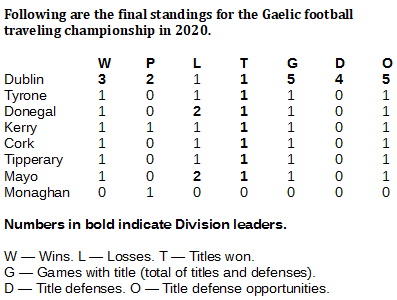 The year 2020 saw little traction in the Gaelic football traveling championship.
Dublin, which brought the title into the season, held it for two wins and two draws before falling to Tyrone. Then came coronavirus to the world and all was halted for a time.
When play resumed, Tyrone held six games of title all-time, second to Dublin's seven. But Tyrone couldn't stave off Donegal, and now we were into a streak of seven consecutive failed title defenses (or successful title challenges) to end the season.
It ended like 2019, with a Dublin victory for the County Championship. Dublin now has eight games of title and the next defense entering 2021. 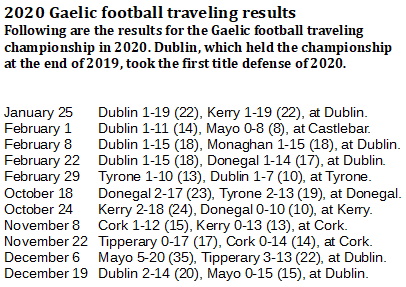