Saracens, the dominant team in Premiership Rugby during recent years, will be relegated for salary cap violations in 2020-21. The turmoil, as well as the pandemic, wrecked the Saracens season, and Exeter, the 2019-20 champion, is poised to take the all-time lead in the English rugby union lineal. 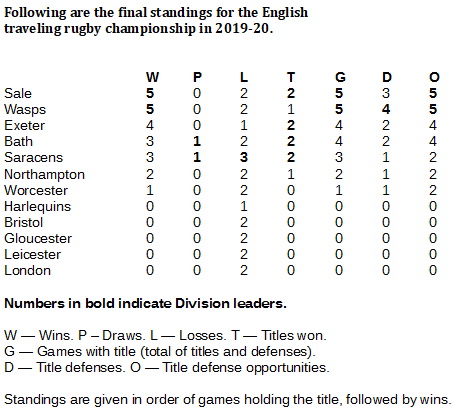 A tight 2019-20 season in English rugby figures to be followed by a tightening of the traveling championship's history.
The 2019-20 season saw six different teams win the championship a total of 10 times in 24 games. The top clubs were Sale and Wasps, each with five games of championship. Exeter and Bath each had four, followed by Saracens with three, Northampton with two and Worcester with one.
Five of these teams won all the titles also in 2018-19, the first year of this exercise. Despite the same teams winning, the race is rather lopsided because of the dominance projected by Saracens in 2018-19. With 11 games of the championship that year, Saracens is up to 14, most of all-time.
However, Saracens is being relegated in 2020-21 due to violations of the league's salary cap, 7 million euros. So, the chance exists for someone to catch up.
The best candidate is Exeter, which was second at the end of 2019-20 with 10 games of championship. Exeter also held the title at the end of the season, so the chance to catch Saracens on top of the standings is right there.
Wasps is third all-time with eight games of title, followed by Sale with six, Bath has four, Northampton has three and Worcester has two. 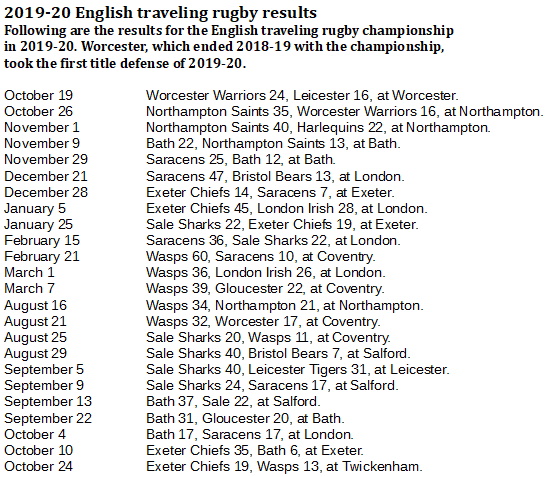