Shortly after the All-Star break in 2019, the San Francisco Giants consolidated the Northwest Conference lineal championship. The playdown went down quickly and evenly. 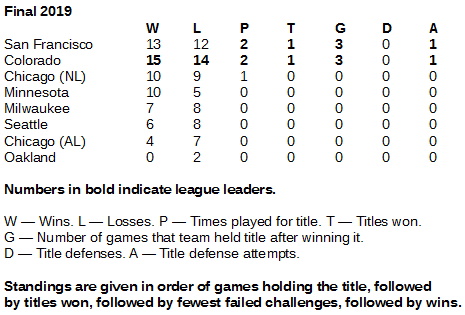 If the play-down for the Northwest lineal baseball championship in 2019 is an indication, this is going to be an even competition.
By the time the championship was decided in late July, the Colorado Rockies, Chicago Cubs, Minnesota Twins and San Francisco Giants had each won four series with championship shares on the line. With only two exceptions, all the the lost series for the four leading clubs were against each other.
As the Giants and Rockies began a three-game series in San Francisco June 24-26, the Rockies held four shares of the Northwest lineal and the Giants held three. By winning two of three, the Rockies assumed seven of the eight championship shares. At that point, the only other share belonged to the Chicago White Sox.
The Chicago Cubs took that share away on total runs with a two-game split against the White Sox July 6-7. Ten days later, the Giants swept Colorado in Coors Field to take over those seven shares. The Giants and Cubs met with all the shares the next week in San Francisco, and the Giants won two of three to inaugurate the Northwest Conference lineal championship.
The Giants and Rockies traded the title back and forth, so the Giants ended the season holding the title. Because coronavirus compromised the Major League Baseball schedule considerably in 2020, this championship will resume in 2021. 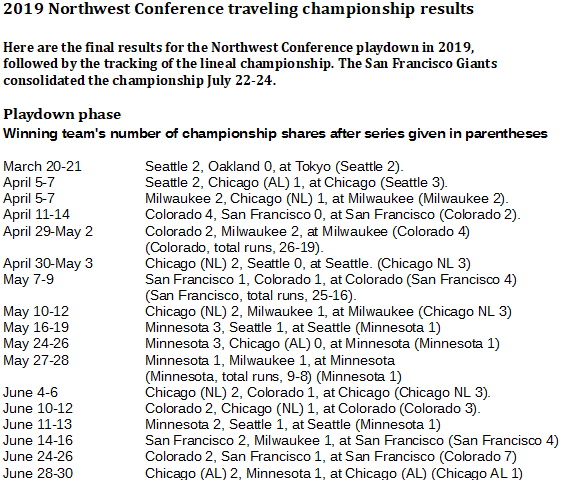