The Cleveland Indians, falling from the First Division in 2019, needed to snag a traveling championship to at least qualify for the Super League. But the Houston Astros outpointed them. 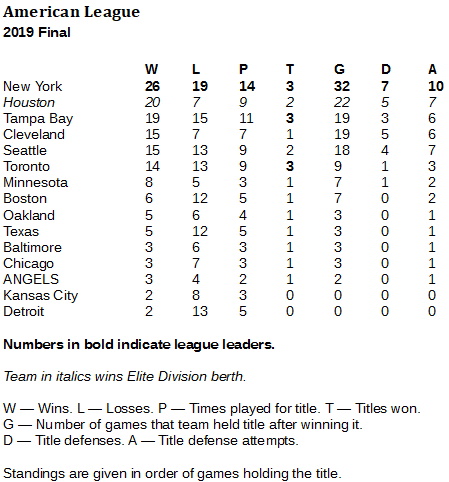 The 2019 lineal championship in the American League offered up five contenders, each with such a different story to tell that one longs for a bygone day when decisions about them did not have to be made.
But that day is not today. Now, we need to name a winner, and no such thing emerges from these standings. Fortunately, we've worked up criteria so we won't go to the Christmas holidays every year arguing with ourselves about it.
First, of course, we decide which clubs are entered into the glamorous criteria stat-off that will decide which club will win the Super League berth that goes to the winner. For that decision, we also have criteria, which amount to requiring some combination of championships and defenses adding up to five or more. Five teams made that cut: the New York Yankees, Houston Astros, Cleveland Indians, Tampa Bay Rays and Seattle Mariners.
One interesting team that did not make it: The Toronto Blue Jays, who won the championship three times, tied at the top, but could not produce two defenses to go with them. Until mid-September, the Jays had only one undefended championship to their credit, but they then beat the Yankees two of three in Toronto before defending that title with a sweep of the Baltimore Orioles.
Now, the Jays were two series of championship away from the stat-down, but it was not to be. The Yankees took them down in Yankee Stadium, two-of-three, Sept. 20-22. A week later, as the season ended, it happened that the Rays had taken the title from the Yankees when they arrived in Toronto. The Blue Jays won that series, putting themselves at three titles and one defense. All they needed was one defense to make cut. But the season was over.
Next, we run the five remaining teams through the criteria. The winner in each category gets a point, which is split in cases of ties. Here's how it ended up:
1. Most championships. (New York .5, Tampa Bay .5)
2. Most title defenses per championship. (Cleveland)
3. Best winning percentage in traveling championship games. (Houston)
4. Most victories per time playing for the championship. (Houston 2.22, Cleveland 2.14, )
5. Most games as champion per time playing for the championship. (Cleveland 2.71, Houston 2.44, New York 2.28)
6. Fewest failed challenges. (Houston, Cleveland)
7. Head-to-head record in traveling championship games (Houston).
The last of those, the head-to-head record in traveling championship games, really functions as a tie-breaker. The only teams worth considering are those that are within a point of the top when we get to it. In this case, those teams were the Astros and Indians. The Astros were 3-0 and the Indians were 2-1.
So, it was close, but the decision matters. The Super League goes to the Astros, who didn't need it because they finished in the top half of the 2019 First Division. The Indians, relegated to the Second Division, still could have gone to the 2021 Super League by winning this traveler. Didn't happen. 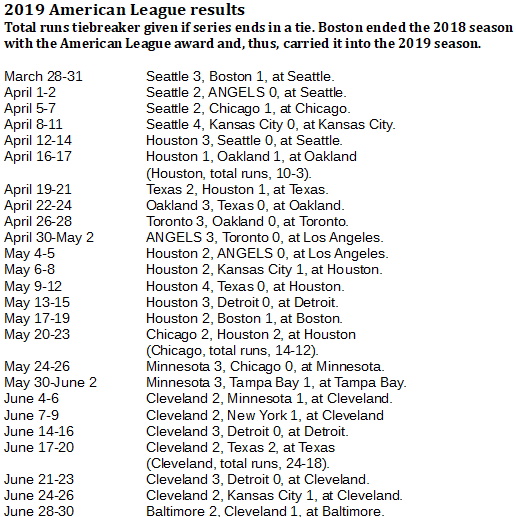 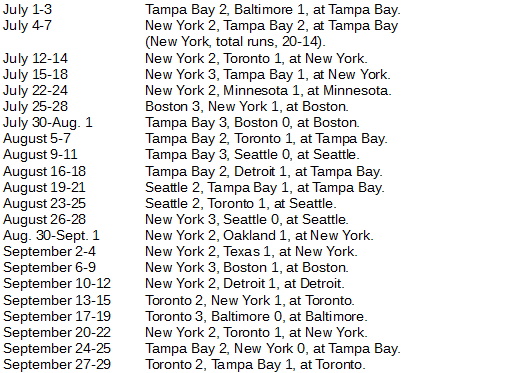