Limerick rallies with hurling lineal in 2020

Clare began the 2020 season with a five-game championship defense streak in the hurling lineal, but Limerick bounced back with five games of its own championship, building its historical lead. 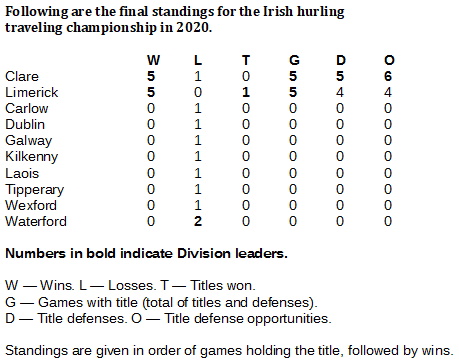 As the senior hurling championship transpired around Ireland in 2019, it turned out that the team holding the traveling championship at the end couldn't even get out of Munster.
With no chance to advance, Clare defeated Cork on the last day of the Munster County slate, taking the title from Cork. Thus, the traveling title didn't go as far as the national tournament.
Then, we had 2020, and the coronavirus. And we had Clare tearing up its group in the National Hurling League with five wins and a draw, first place when the virus shut down everything.
Play reconvened in late October with the Munster County playoff duel between Clare and Limerick doubling as National Hurling League championship game on Oct. 25. Limerick won, then proceeded to win all the way through the county championship and the national final in December against Waterford.
Limerick, which won 2019 with five games of traveling championship, needed that October win against Clare to stay ahead in the all-time standings. Limerick then extended its all-time total to 10 at the end of 2020, with Clare standing in second place with eight games of championship. 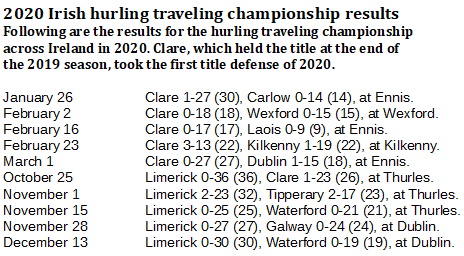