The Washington Nationals consolidated all the shares of the Southeast Conference lineal championship in late August 2019. At the end of 2019, and entering 2021, that championship belongs to the Atlanta Braves. 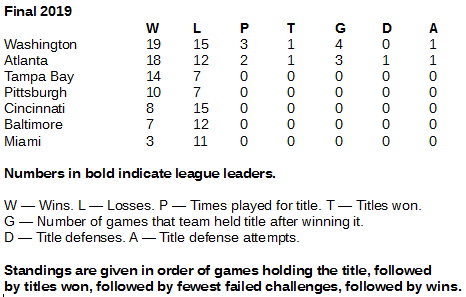 The Atlanta Braves ended the 2019 season with the Southeastern lineal championship, which had been consolidated at the end of August. The Braves will take the title into the 2021 season.

A mass of the play-down title shares, five of the seven, congealed in Cincinnati May 27-29, when the Reds and the Pittsburgh Pirates split a four-game series. The Reds, who entered the series with three shares, prevailed in the total runs tiebreaker (26-22), thus claiming the two shares entered by the Pirates.

By then, Tampa Bay had the other two shares, which they guarded until losing by runs in a four-game split on the road against Baltimore August 22-25. In the meanwhile, the five shares belonging to the Reds were transferred to the Washington Nationals, then to the Braves, then back to the Nationals, then Atlanta again, once more to the Reds and Washington in mid-August.

When the Nationals with five shares met the Orioles with the other two (in Washington, Aug. 27-28), a two-game split ensued. The Natties won the total runs tiebreaker, 8-6, and consolidated the championship. 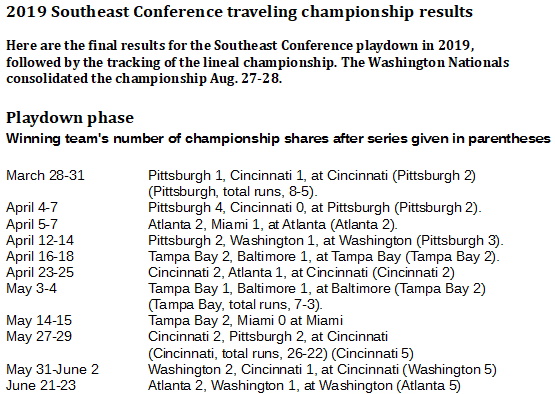 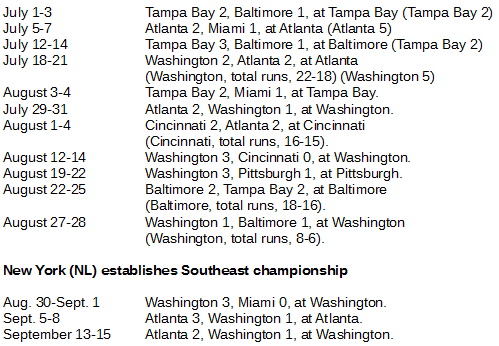