No winner as Southwest launches lineal in 2019

After a full 2019 season of attempting to play down the Southwest Conference for a lineal champion, the task was not yet completed. The Houston Astros and Arizona Diamondbacks each ended the season with four of the eight title shares. 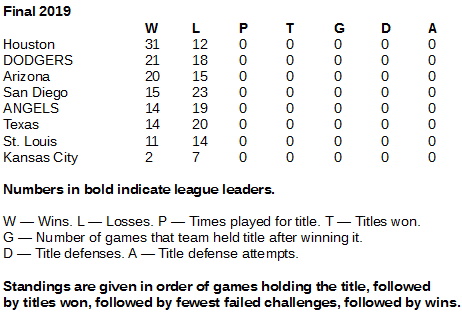 The basis of the four-by-four baseball standings on these pages is a division of the big league baseball markets into four ordinal directions (northeast, southeast, southwest and northwest, going clockwise) and, intending the most equal distribution and geographic integrity possible, placing the teams into these four new "conferences."
In addition to playing each year for this important conference championship, these ordinal conferences also are purposed as divisions in corresponding new leagues based on cardinal directionality (north, south, east and west). Thus, the Northeast Conference is simultaneously the North Division of the East League and the East Division of the North League.
As the East Division of the North League, the Northeast partners with the Northwest, which is the West Division of the North League. As the North Division of the East League, the Northeast partners with the Southeast, which is the South Division of the East League. The Southeast Conference, in turn, also is the East Division of the South League. And so on. This pattern of relationships between ordinal conferences and cardinal leagues generalizes across the four-by-four.
In addition to their own composite regular season championships, these conferences and leagues also are tracked for lineal championships. The standard practice for starting a lineal is to begin it with the league's champion from the previous year. Sometimes, though, like this, there is no such pre-existing entity as a North League, East League or Northeast Conference that has an established champion.
For these conference lineals, this means there is no obvious team to be "it" as we begin this perpetual game of tag. How is that decision reached?
For these new baseball lineals established in 2019, we took a mixed approach. For the cardinal leagues, we just started it with the teams for which the best argument could be made based on the 2018 results. For these ordinal conferences, we're doing it the better, harder way, which is to put it up for grabs.
Consider the Southwest Conference. It has eight clubs – the Dodgers and Angels from Los Angeles, the San Diego Padres of far Southern California, the Arizona Diamondbacks of the desert Southwest, the Houston Astros and Texas Rangers of Texas, the Kansas City Royals of cattle country, and the St. Louis Cardinals, who owned the American Southwest before any of these other clubs arrived and before all but the Dodgers even existed.
We began the lineal championship by giving each of these clubs one share of it. When any of these two clubs met, each put up its shares, winner take all. Eventually, all of the shares will consolidate with one team. At that point, we have a champion.
In every other cardinal conference lineal we launched in 2019, a decision was reached before the end of the season, sometimes, well before then. But not the Southwest.
At the end of the 2019 season, the Astros and Diamondbacks each held four shares. How those shares ended up in those two places is two different stories.
The Astros actually lost their share to the Texas Rangers at the start of the season, so they were empty-handed entering a rematch April 19-21 in the Metroplex, which the Rangers entered with three of the title's eight shares. And the Rangers won again.
So, the Astros had nothing when they went to Anaheim during the first week of May to play the Angels, who entered with one share. This time, the Astros won. After that, they were scorching.
The Rangers still had their three shares when they met with the Astros in Houston for four games May 9-12. The Astros won all four. Now, they held four shares, half of the championship. And they have guarded them jealously. The Astros ran the table, winning each of nine series against conference teams through the end of the season. However, none of the teams they played held any of the championship, so the Astros ended the year with their same four shares.
The story of the other four shares begins right after the Astros consolidated their four shares. Within a week, the Dodgers defended their two shares from the Padres and the Rangers swiped two shares from St. Louis. A week after that, the Angels took those two shares from the Rangers. The Angels and Dodgers met at Dodger Stadium for two games June 10-11, each club putting their two shares on the line. The Angels won both, so the wait was on for the moment when the only teams with shares would meet to narrow it down once and for all.
It never happened. Instead, these four shares owned by the Angels changed hands twice before July, once to the Cardinals, then the Padres. The Dodgers won those shares at the start of August, then lost them to the Diamondbacks at the start of September. Then, the Diamondbacks defended those shares four times ending the season.
The chase will resume in 2021. In 2019, the Astros were, by far, the best performer in this group, going 31-12. But they don't have a championship to show for it, and nor does anyone else. 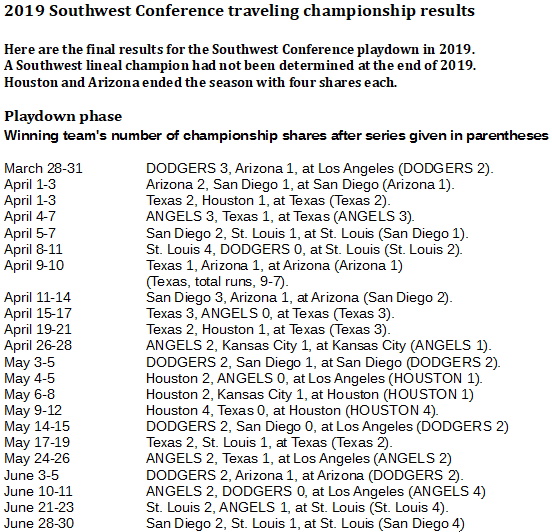 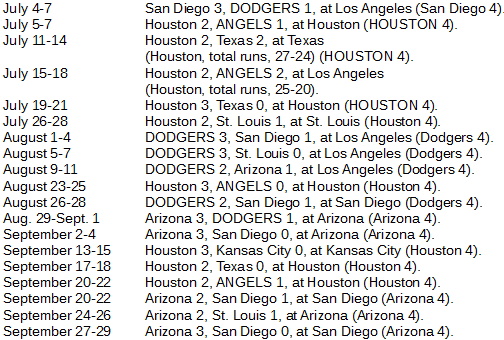