Pandemic or not, Auckland City dominates Oceanian soccer in 2020

Auckland City won its second earned championship in three years of the Oceanian traveling soccer championship in 2020, producing a 12-game run that increased its historic lead in the competition. 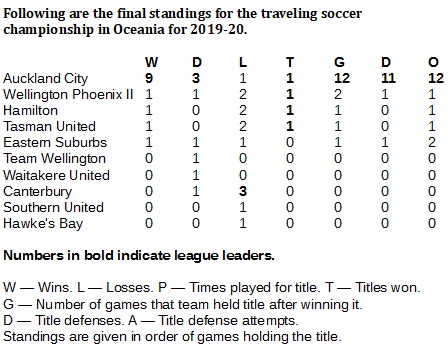 The traveling soccer championship through Oceania might get around a bit, but it always gets back to Auckland City. And, when it does, it stays there for a while.
Thus, a 2019-20 campaign cut down in March by coronavirus ended after 17 games, and 12 of them belonged to Auckland City, which held the title for 47 of the 66 games in which it has been contested through 2020. The championship began the season with Eastern Suburbs, moved immediately to Hamilton and, third game of the season, Auckland City claimed its second earned championship all-time with a 5-0 home field win against Hamilton on Nov. 15.
Auckland City held on for 11 defenses, all the way up to a 2-1 loss at Tasman United on Feb. 22. Tasman immediately dropped it to Wellington Phoenix II, the top farm for the Wellington Phoenix squad that competes in the Australian A-League and, therefore, Asia.
Wellington Phoenix II held on for one defense before the season was called. Nine different teams have held the Oceanian traveling title in three years of operation. But of the eight title holders besides Auckland City, none has more than the four game of championship claimed by Canterbury United. 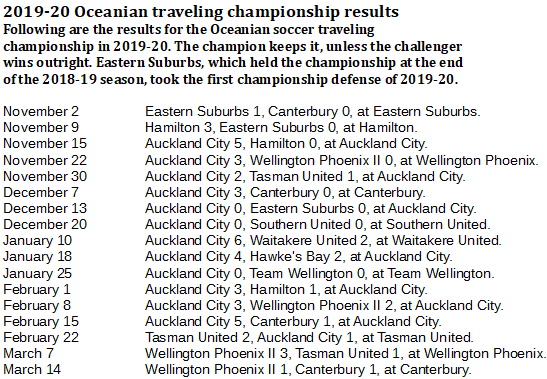