During almost two years in which Paris Saint-Germain didn't even play for the traveling soccer championship in France, no other club at the top level of French soccer could gain ground. So, PSG regained the title and picked up where it left off. 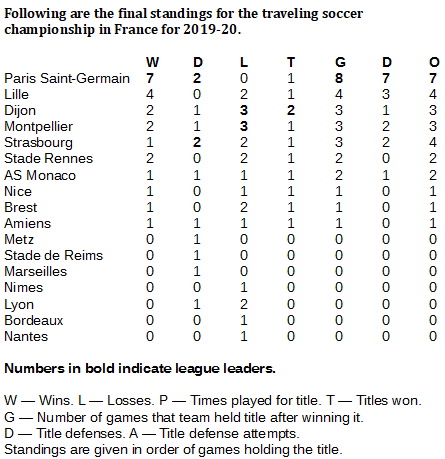 The first portion of the 2019-20 French soccer season, so far as the traveling championship is concerned, played out exactly like the previous season. The next portion played out as the lineal championship has played out historically. Then, of course, the season was over.
Other European soccer leagues picked up after a couple months of waiting out the coronavirus, but the French said it's only sports; hell with it. So, the last game of the traveler took place on Feb. 29, a 4-0 win for Paris Saint-Germain over Dijon. And this gets us to the history.
The history of this traveler is Paris Saint-Germain. The history is that when PSG gets it, however it gets it, long winning streaks usually ensue. We started here with PSG as the obvious choice as the first caretaker in 2015, and after 27 defenses, we can't say PSG invalidated that choice.
At the start of the 2016-17 season, we had to give it to PSG again. The team holding the title at the end of 2015-16, Stade Reims, was demoted. So, the title went to the team with the best record in the chase that year, PSG. The Parisians were kind enough to drop this second bastard championship after two defenses. But they regained the title in January 2017 and held it for 13 games. In 2017-18, PSG added another 10-game championship. At the end of the year, PSG held 52 games of title through three years, and no one else in France had more than 17 (Marseille and Lyon).
From May 12, 2018, when PSG ended it's 10-game title with a 2-0 loss at home to Stade Rennes, until January 12, 2020, going on two years, PSG never played for the French traveling championship. Could somebody – anybody? – gain on PSG?
During that whole period, 58 games, no one did better than Lille, which held 10 games of the championship. During that 58-game period in which PSG happened to never cross paths with the traveling championship, the title changed hands 25 times.
PSG finally got a crack at the title again on Jan. 12, 2020, but finished with a 3-3 draw against Monaco in Paris. By a quirk in the Ligue 1 schedule, though, the two clubs met again in Monaco for their next game on Jan. 15, and PSG won the title with a 4-1 win. From there, PSG tacked up seven defenses through Feb. 29, when the lights went out on the season.
So, PSG has 60 games of title. After nearly two years of not even playing for the lineal title, PSG has expanded its lead from 35 games at the end of 2018 to 41 games at the end of 2020.
We don't claim to be doing science here, but what we have here is a pretty good clue – another one – about PSG's dominance within France. PSG can go through the league and put up a pretty good unbeaten streak of 10 or 15 games, and no one else can. A couple of other clubs – Lille, Lyon, Marseille – have been able to win five or six in a row with the lineal, but not beyond that. 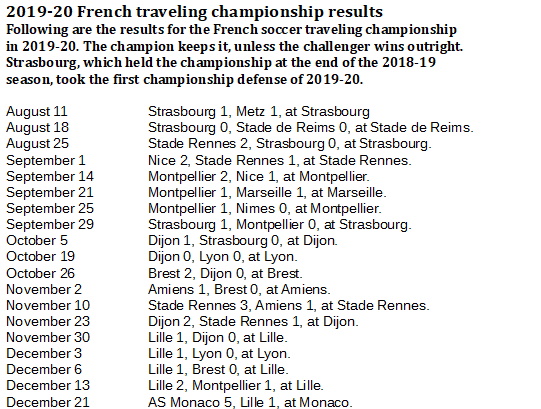