Two years into the Pakistani cricket traveling championship, Quetta and Multan have been the two season champions, while Lahore is right with them among the all-time leaders. 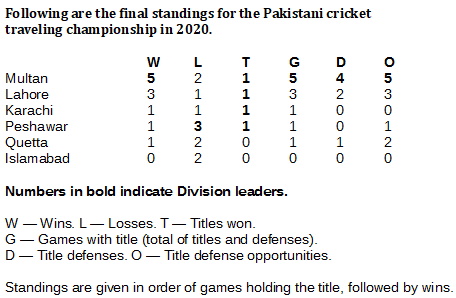 The 2020 traveling cricket championship in Pakistan went like a lot of the cricket tournaments in the year of coronavirus.

Short seasons meant five-game winning streaks passed for large achievements. It's not the most fun we've ever had, but they at least they played a round-robin in the Pakistan Super League, so the prize could have moved around.

It just didn't, as least not much. Before the pandemic, the Multan Sultans won the title from Peshawar Zalmi, then defended it four times, losing it right before play was halted. When play resumed, only three rounds of games were played.

Thus, Multan is the year's best performer in this traveler with five games of championship. In the two years of tracking, the all-time leaders are the Quetta Gladiators, who won six games in 2019 and another in 2020 for a total of seven. Multan is second all-time with six games, followed by the Lahore Qalanders with three.