Four years into the traveling soccer championship in Argentina, we have a tight historical race with Huracán, River Plate and Boca Juniors all within three games of each other. 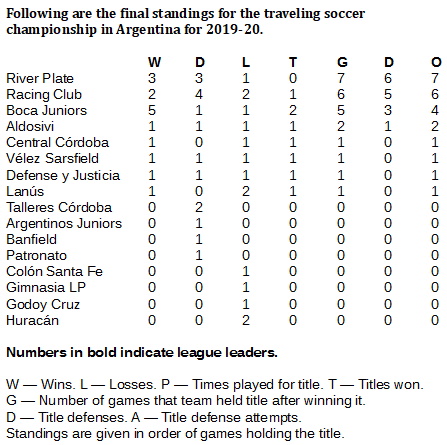 One difficulty with running a traveling championship in a pyramid structure with promotion and relegation is that teams get relegated every year. Sometimes, a team being relegated is holding the lineal championship when it happens.
To keep the championship circulating among the top-division clubs, it becomes necessary to strip the team being relegated of the title. But, then, who gets it?
The practice here is to give it to the team with the previous year's best record in the traveling championship. That team gets the first defense the following year.
One thing we've learned from doing this for a while is that it's not the best idea for balancing the competition to be giving bastard championships to teams that already are on the top of the heap. We wind up with the rich getting richer.
But what better way is there to decide who gets to carry the lineal championship? Perhaps, some day, somewhere, we shall decide to just throw the whole thing open when a relegated team owns the championship and play it down.
But we took the easy way out in Argentina for the 2019-20 season. At the end of 2018-19 Tigre owned the Argentine traveler, but was demoted. The prize went to River Plate for having the most games of title in 2018-19.
Starting the 2019-20 season, River Plate defended this bastard championship seven times. So, the club received a nice return on it's eight-game title a year earlier. With 15 games of title through the 2019-20 season, River Plate now is third in a tightening Argentine race.
The all-time leader, Huracán, still has 18 games after four years, losing two challenges in 2019-20.
Boca Juniors, which produced five games of championship in 2019-20, now is second all-time at 16. And Boca Juniors hold the title entering the 2020-21 season with a chance to move quickly into the top position.
Racing Club, which finished second in 2019-20 with six games of title, now is up to eight all-time. 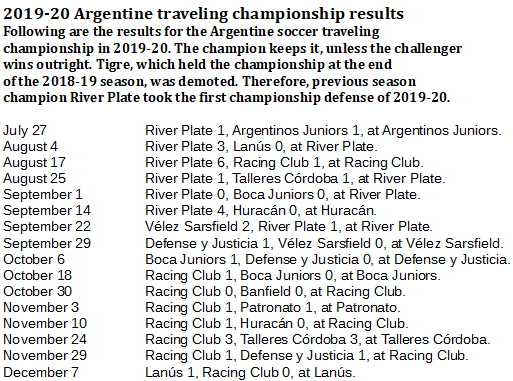