The Colorado Rockies secured a berth in the 2021 Super League by winning the 2019 National League traveling championship on criteria. 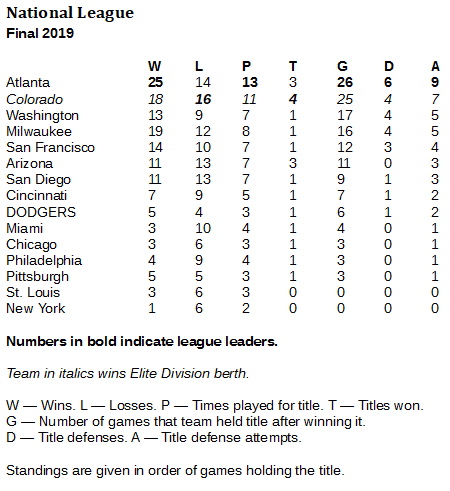 Trying to work out the best way of determining the best lineal championship performance at the end of a sports season has proved, not surprisingly, to be a continuous process. Difficulties lie in many folds, for there are many ways to value these performances.

Tedious, we know, but it needs to be on the record. Going forward, that's how we'll run the lineal championships in baseball. We already have, however, published the inter-league championship for 2019, so we did that one the old way, but it would not have changed the outcome. In the National League, though, it amounted to two teams qualifying for the 2019 stat-off that would not have made it otherwise, and it made a difference.

Take a look again, if you'd like, at the standings and results from the National League in 2019, or any league in any year, and ask yourself which team should be named the champion. It's usually not obvious. We used to just eyeball it, but now we need a defensible decision method so we can have a more defensible decision, as the result of that decision determines a Super League berth for the next year.

First, as we've explained before, we have to decide which teams go into the criteria mix, in effect, becoming the finalists for the annual lineal championship. By the criteria we have just laid out, we get four clubs -- the Atlanta Braves, Colorado Rockies, Milwaukee Brewers and Washington Nationals.

Now, we set out the criteria. All four teams are considered by each criterion. The best team gets the full point for the criterion. If two or more teams finish tied at the top in some category, they split the point evenly. We have seven criteria. The team with the most criteria points wins. If it's tied, then we go to head-to-team among the teams that are tied. If it's still tied after that, we declare co-champions and the Elite Division berth goes to the team that has gone longest since being in the Elite Division. If it's still tied after that, then we declare a co-champion and no team goes to the Elite Division.

Next, we lay out the criteria and list the team that won, with the winning total, or average, if that's what it is:

2. Most title defenses per championship. (Washington, Milwaukee, four each).

4. Most victories per time playing for the championship. (Milwaukee, 2.375).

5. Most games as champion per time playing for the championship. (Washington, 2.43).

Add it all up and the Rockies won three categories of the seven, Milwaukee and Washington each won 1.5 and Atlanta won one.

Thus, the Rockies win the championship for the season, and the Elite Division berth, which they needed, as they didn't qualify in the pyramid.

We like the criteria system because if you ask the criteria why the Rockies won the championship, the criteria gives you a straight answer: Because the Rockies won the most titles, they won the title every time they challenged for it, they demolished the other contenders head-to-head for the title and no other team can make an equivalent case. All of that is right there in the information provided by the standings and results, but we need criteria to put that information through relevant questioning.

The Rockies did most of their work in April, taking the prize from the San Diego Padres on the road, then defending the championship four times. It would be the only four title defenses the Rockies would register all season, but three of them were against Atlanta, Milwaukee and Washington, saddling each with a failed challenge. That would loom huge on Criterion No. 6, which Colorado won almost entirely through that run of games.

The Rockies held on for 17 games of defense before losing it to the Arizona Diamondbacks in May. The Braves immediately snatched the prize from Arizona and tore out four defenses amounting to 15 games of title defense, pulling nearly even with the Rockies.

However, the Washington Nationals who took the championship with a two-game sweep from Atlanta May 28-29, then mounted a 17-game defense before the Braves took it back by winning two of three in Washington June 21-23. With the victory, the Braves not only stopped Washington at 17, but they also picked up the four games of defense, bringing themselves to the  lead at 19, when they immediately split four with the Chicago Cubs, who took the tiebreaker.

Colorado returned to the fray in July rather fortunately. After winning the prize from the Reds, the Rockies immediately lost four straight to the San Francisco Giants. So, they get dinged for failing to defend, but they still claimed four games of defense, launching ahead of the Braves with 21.

Another victory in late August added seven games for the Braves, bringing their total to 26 before they visited Colorado on Aug. 26 to make up a game postponed by weather in April. By simply winning that game, 3-1, on a walk-off homer in the bottom of the ninth, the Rockies also added four games of defense despite being immediately swept four games by the Pittsburgh Pirates, so now they were up to 25, needing one more to tie the Braves. In addition, the Rockies stopped the Braves from accumulating more numbers.

Within a week, the Milwaukee Brewers won the title with a four-game sweep of the Florida Marlins, starting a torrid 15-2 title run with four title defenses that took them all the way from nowhere to the criteria leader before they visited Colorado for the final series of the regular season, Sept. 27-29.

The stakes were clear. The winner of the series would win the lineal title for the year. After the Rockies claimed an 11-7 win in the opener, they clinched the next day with a 3-2 win on Trevor Story's tenth-inning homer against Matt Albers. 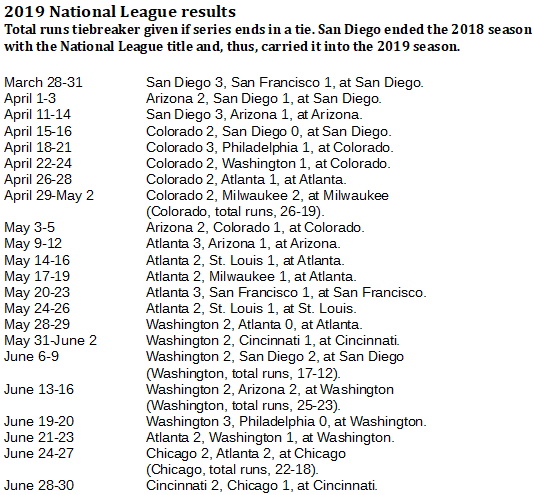 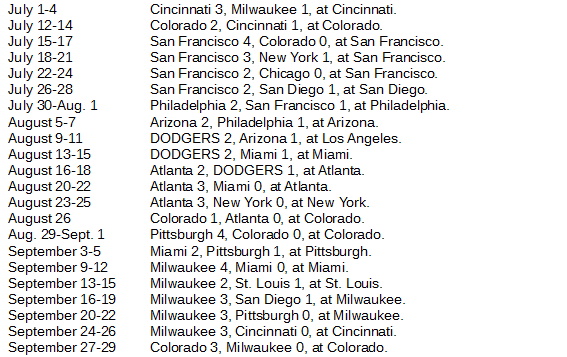