No one in the five nations of the rugby union Pro14 could touch Leinster in 2019-20. However, the English power Saracens knocked Leinster out of the European cup. Leinster still took the all-time lead in the European rugby union traveling standings. 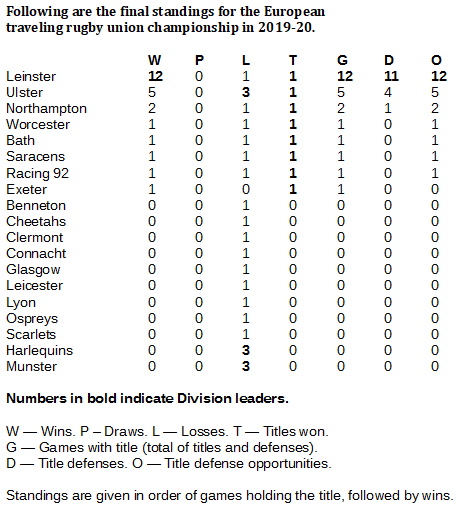 Stepping out of the Pro14, Leinster finally met its match in the 2019-20 European rugby union traveling championship.
The Lions still had the best year with the traveler of anyone in Europe and moved into first place in these all-time standings composed of two seasons. But losing at all, to anyone, was news.
Leinster held the title for 12 games, starting with a Pro14 win over Ulster in Dublin on Dec. 20 and ending with another Pro14 win over Ulster in Dublin on Sept. 12. The latter was the Pro14 Grand Final, at the end of which Leinster had won all 17 of its games, regular season and playoffs, in the Pro14, as well as all seven games on the way to winning the Celtic Cup. They also were 6-0 in Champions Cup pool play.
That is, Leinster was 30-0 in its major competitions for 2019-20 entering the knockout quarterfinals of the European Challenge Cup. Three wins from an absolutely perfect 33-0 season.
But Leinster didn't get even one of them. The Lions were undone by a Saracens club attempting to defend the European championship and its own honor in the face of domestic relegation for breaking the salary cap. The 25-17 win for the Sarries gave them a chance to salvage a disappointing year. For Leinster, it ended the year.
Immediately, Saracens fell in the semifinals to the Parisian side, Racing 92, which then lost the Grand Final, 31-27, to Exeter. Thus, Exeter has the championship entering 2020-21.
But Leinster now has a big lead in the all-time standings with 20 games of the title. Toulouse, which didn't run into the championship in 2019-20, is second with 10. Ulster and Saracens are tied for third place with three games each. 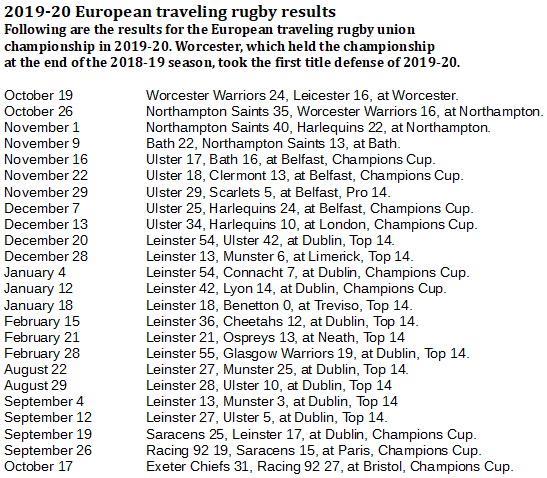