It took almost four years of keep-away by the top soccer clubs in Argentina before the South American traveling soccer championship reached Brazil, via Ecuador, in the 2020 Copa Libertadores. 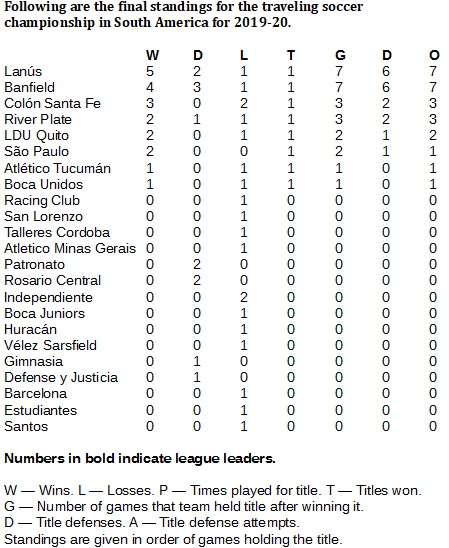 The 2019-20 lineal soccer championship season in South America was fun, while it lasted.
The first four years of the championship saw its entire existence take place in Argentina and Venezuela until just before the coronavirus pandemic stopped everything.
Even within Argentina, the prize was getting around a little bit. Before March 2020, six different Argentine teams held the title.
River Plate added three games to its total and now has an all-time mark of 18 in the South American championship, the most of any team. With seven games of title in 2019-20, Lanús raised its total to 14, which is second place.
Godoy Cruz is second with 10, Estudiantes de Mérida of Venezuela is third with nine, and Talleres Cordoba is fourth with eight.
On March 4, River Plate took the championship to its Copa Libertadores match at traditional Ecuadorian power LDU Quito, which then took the title for itself with a 3-0 win. The title stayed in Ecuador for only one more game before Quito faced Brazilian side São Paulo in the Libertadores.
São Paulo's 3-0 win moved the South American traveling soccer title to Brazil for the first time. The prize debuted there in the Campeonato Paulista, a 2-1 home win for São Paulo over Santos on March 14.
And, just like that, the season ended. 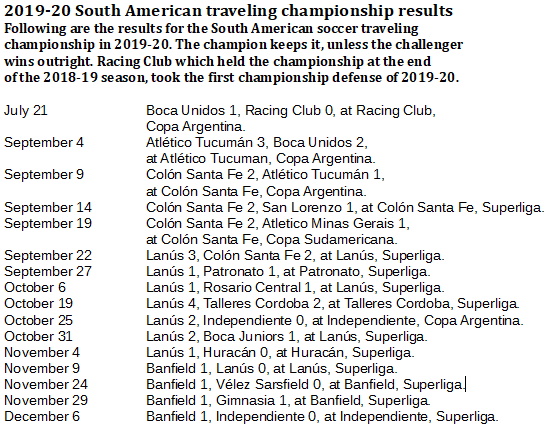