Liverpool expanded its all-time top total of English traveling championship to 55 games in 2019-20, but the lineal was on the move after the pandemic, ending the season with Southampton. 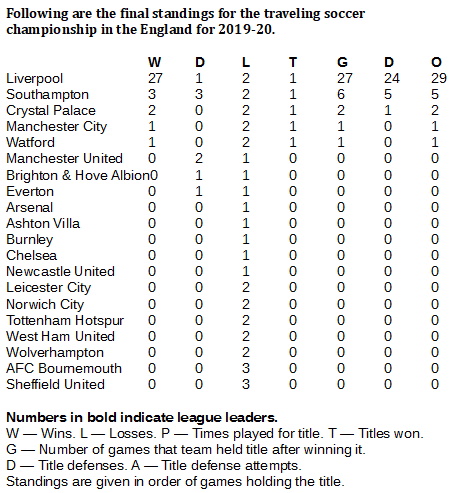 The way Liverpool was dominating the traveling championship across English soccer, it seemed nothing short of a global pandemic could stop them. But by the time the disaster arrived in March 2020, the Reds had already fallen to Watford, and many travels awaited the title when play resumed in June.
In fact, Crystal Palace already had snatched the title from Watford when play resumed, and Liverpool took the title right back from Palace with a 4-0 home win on June 24. However, Manchester City, the other top English club, took the title from Liverpool with a 4-0 win at City on July 2.
At that point, historically (beginning with the 2015-6 season), Liverpool had established itself as the run-away leader in England with 55 games of title, 51 of them on the last two seasons. Manchester City was second with 26. Could City now tack up a big run with the title and approach Liverpool in the all-time standings?
No. City went to Southampton on July 5 and suffered a 1-0 loss. It was Southampton's first traveling title in four tries. And Southampton held on for five defenses to close out the 2019-20 season, interrupted and extended by the pandemic. 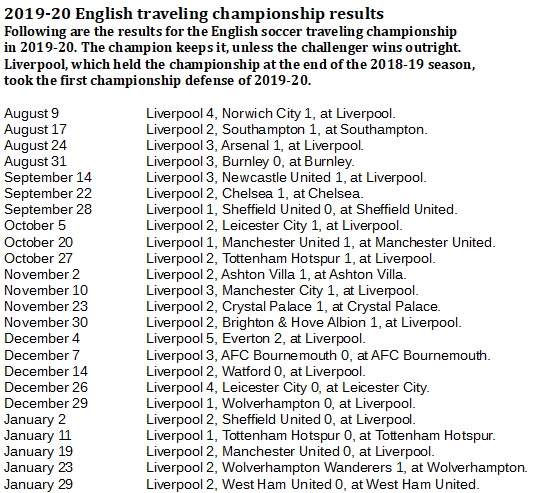