Surrey rode through a streak of 20-overs win to the best season of the year in English cricket, a 2020  campaign much adjusted by the coronavirus. Essex won enough early in the year to maintain the all-time lead in this two-year-old exercise. 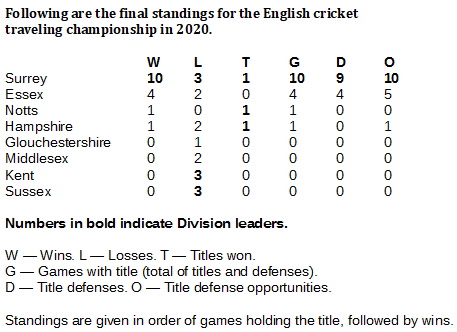 Rather than tempt too much fate against coronavirus, the English cricketers didn't even begin playing in 2020 until August.

And the schedule was attenuated. Typically, the English cricket season runs along three strands.

In 2020, the One-Day Cup was canceled, so all the matches were either unlimited overs or limited to 20 overs. And the County Championship was canceled, replaced by a makeshift competition called the Bob Willis Trophy. The tournament involved playing through two regional pools with the winners in a championship game.

Often, such as in baseball and hockey, we have suspended lineals rather than run them under regionalized circumstances. However, English cricket is different because we also factor in the 20-overs version, which also ran regional pools, but then had an eight-team knockout tournament. At least the championship might travel somewhere.

And it did, but not until the very end.

Surrey, which had failed in earlier bids for the title in the unlimited and 20-overs version, finally snagged the title in the shortened game, then held on tight for nine defenses, eight of them in 20 overs.

But the T20 Blast championship game pitted Surrey against the Notts Outlaws, those men from right around Nottingham Forrest, and the Outlaws certainly stole from the rich, taking the English cricket traveling title and the T20 championship in one swoop.

Essex finished 2019 with 14 games of championship, then began 2020 with four more, bringing its all-time leading total up to 18 games. Surrey has rallied to second place with 12, followed by Hampshire with seven. 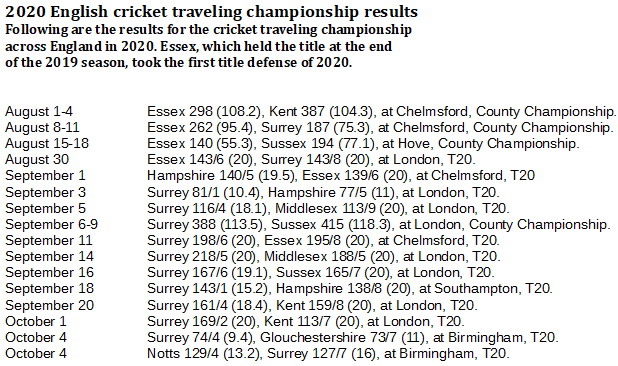