One thing the coronavirus pandemic did not do in 2020 was create such chaotic conditions that it was impossible to sustain lineal championships in sports throughout the world.
We know from what happened in rugby, where Leinster ran the whole domestic table, that top teams could and often did maintain their strength. However, because of the reduced number of games, we also had many tight races.
In Australian rules football, one race in 2020 was between Geelong and Richmond for the lineal and another was between Port Adelaide and Brisbane on the ladder.
The decision between Port Adelaide and Brisbane was made by points differential. Both finished 14-3, but the difference in their scores was 80 points in Port Adelaide's favor over a 17-game season. No matter, really. They held an eight-team playoff.
As the traveling championship progressed through the year, Richmond defended it coming in, but Hawthorn, which finished the year 15th on an 18-team table, took it in an upset three games into the season. Port Adelaide took the championship from Greater Western Sydney in July, but defended it only once before falling to St. Kilda.
Geelong snagged the title from St. Kilda in August and held it for four defenses, the longest championship streak of the season. Richmond put an end to it by beating Geelong in September, then added a title defense for four games total of title, one fewer than Geelong.
But Brisbane, the team tied on top of the ladder, defeated Richmond on the final day of the season, taking the championship into the playoffs. Again, Geelong took the title by beating Brisbane in the first round of playoffs.
Now with six games of title entering the Grand Final against Richmond, Geelong was assured of the traveling championship for the year. Richmond won the Grand Final, though, and holds the championship entering 2021.
All-time, which means through two years here, Brisbane remains on top of the Australian football standings with 12 games of championship, followed by Richmond with nine and Geelong with six. 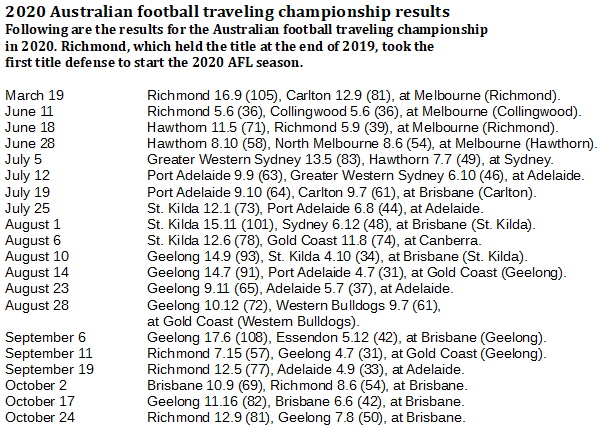