The Arab world has been conspicuously missing from these pages, and one reason is that FIFA divides Asian soccer so that clubs from the Arabian region almost never play clubs from Pacific Asia. Thus, we shall launch a West Asian lineal in 2021. As far as this Asian lineal, Ulsan now has the all-time lead. 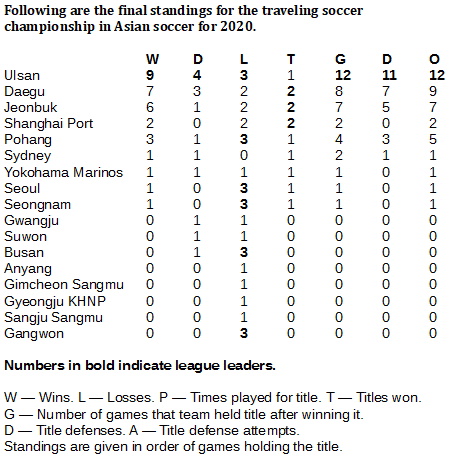 We've given the Asian traveling soccer championship four years now, and we're ready to bite the bullet over a serious problem.
The problem concerns the part of the world known here in The States as "the Middle East," which more really is the mid-point between East and West, though it also is the Cradle of Western Civilization and, by FIFA geography, the West Region of Asia.
It seems to be all over the place and no place, at least by judging from these pages. We're interested in sports all over the world here. We've looked into launching some lineal basketball championships in the region, but haven't been lucky about finding the information. We also hoped that the Asian soccer lineal would take us through that part of the world.
But we're convinced after four years that it isn't likely to happen soon. It has to do with the way FIFA divides up the Asian Champions League, which is the common vehicle through which these continental club titles pass from nation to nation.
In essence, FIFA runs it's Asian Champions League as if it were two entirely separate tournaments. One tournament, the East Region, is the province of soccer powers from China, Japan, Korea and their neighbors. In essence, Pacific Asia. The other is the West Region, way on the opposite side of FIFA's Asia, where the soccer powers come from the United Arab Emirates, Saudi Arabia, Qatar, Iran and their neighbors (India, the largest nation in FIFA's West Asia, merits only one preliminary round qualifier for the Champions League).
The 'twain shall meet, the East Region and the West Region, but only at the very end, in the Champions League Final. Only for one game per year. It's not like Europe, where they mix clubs from all around the continent in the group stage. Asia simply has no interplay between the Pacific Asian clubs and the "Middle Eastern" clubs until the very end and only for that one game per year.
Realizing this, we have decided that, going forward, we will run two separate Asian championships, maybe three. The existing Asian championship will go forward as the Asian championship and the East Asian championship. As the Asian championship, it will be on the line in the Champions League Final, if the title holder makes it that far, which hasn't happened in our first four years. As the East Asian championship, it will not be on the line in the Champions League Final.
Starting with 2021, we will run an West Asian lineal championship, and this won't be on the line in the Champions League Final, either. It will launch with the Iranian club, Persepolis, which was the East representative in the 2020 Champions League Final.
So, now we're on to the Asian traveler in 2020. Once more, it stayed way east.
The highlight was as 12-game championship for Ulsan in K League 1 and the Korean Cup, the longest in four years of this lineal. No team had ever reached 12 games of championship in a year.
Ulsan moved way up to the top of the all-time standings as a result, now with 23 games. Jeonbuk, which gained seven games of championship in 2020, is second with 19. Daegu is third with 16 and Seoul is fourth with 15. 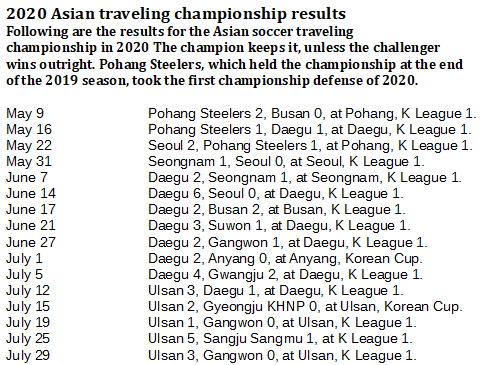 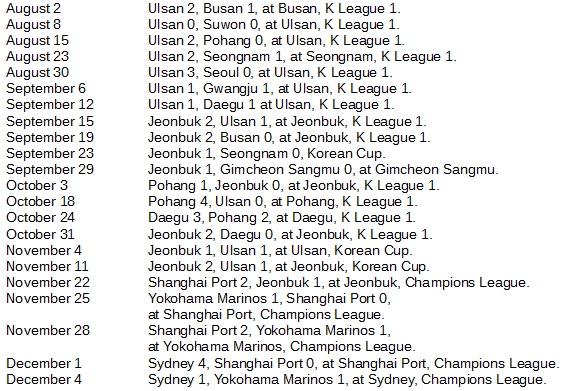