The top two teams in the 2020 Super League, St. Helens and Wigan, held the Northern Hemisphere rugby league lineal title for one game between them. The third-place team, Warrington, held it for nine games, three times as many as any other team. 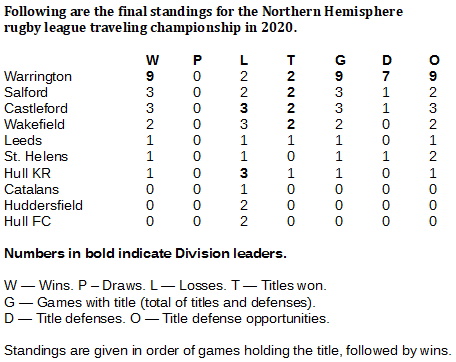 Sometimes the lineal championship looks like one of the more recognized championships, and sometimes it does not. Likenesses between the 2020 Northern Hemisphere rugby league traveling championship and the championship in the 2020 Super League were of the latter kind.
Granted, it was a strange year with the coronavirus and all that.
Warrington Wolves, one of the originating clubs in 1895 formation of the breakaway northern football league, is the only one of those clubs to spend every year since then at the top tier of competition in this 13-player game called rugby league.
So, it was Warrington that went into the pandemic break on a two-game streak with this Northern Hemisphere lineal, then held onto it for six more games when play resumed.
No other team finished even close to Warrington's nine games of championship, including St. Helens, which again won the Super League championship. St. Helens brought the traveling title into 2020, but dropped it to Warrington second game of the season.
Warrington immediately lost to Wakefield, but regained the title in March and went on an eight-game run.
St. Helens brought it's all-time lead in this chase up to 20 games. Warrington, with nine, is in second place through two years of tracking.
In Super League XXV, Warrington finished third, qualifying for the elimination playoffs and getting bounced by Hull FC in the first round. St. Helens defeated Wigan, the regular season champion, in the Grand Final.
Though it won the regular season championship for Super League XVV, Wigan never played for the traveling title during the entire season. 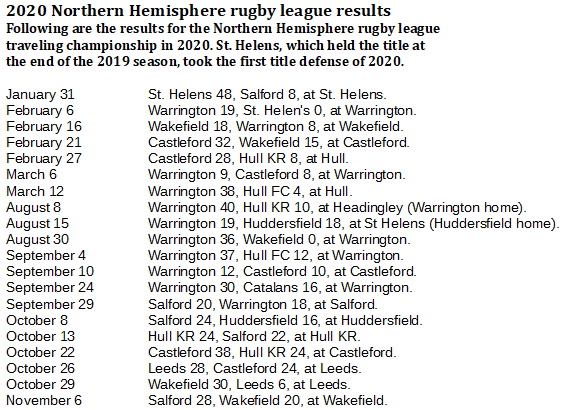