Between the Major League Soccer schedule, oriented differently than other soccer schedules, then the coronavirus, 2019-20 was not a normal year in the Northern American traveling soccer championship. 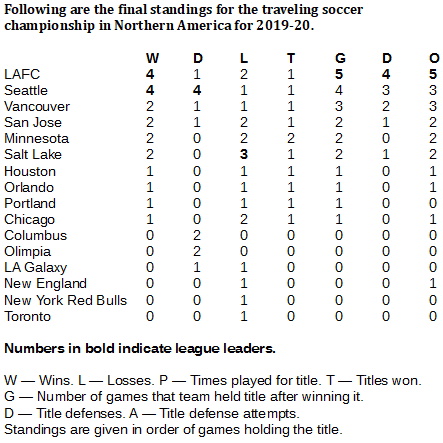 It's always worth pointing out right here that the Northern American traveling soccer championship and the North American traveling soccer championship are two different traveling soccer championships.
Here, we are considering the Northern American championship, which is, in essence, all of the Americas that aren't South America. That is, North America, Central America and the Caribbean.
We began following a traveler through this vast expanse at the start of the 2016-17 season, putting it in the care of Club América, which had won the previous Champions League. The title, in its first three years, went from Mexico to Panama to Costa Rica to El Salvador to Mexico and to the United States by the end of the 2018-19 season.
Major League Soccer, the big soccer league in the United States and Canada, is unlike other soccer leagues throughout the world in that it runs a calendar year season centered on the summer. Most leagues play a wrap-around season that begins in the autumn and ends the next spring.
So, there was a gaping hole in the 2019-20 campaign for this championship. Between the MLS Championship Game on Nov. 10, 2019 and the start of the next MLS season in March 2020, we had a gap of almost four months. The only break came in February, when Seattle put the crown up against a Honduran club, Olimpia, in two Champions League matches. Both ended in draws, so Seattle held onto the title.
Then came coronavirus, which halted this competition after March 7. It wasn't until July that MLS picked up play, and that with a tournament, then a geographically constricted schedule.
As the traveler for the year already was well underway, we just went through with it. Other competitions, the North American kind, were put on hold for 2020.
For the year, LAFC holds the honor with five games of championship, hardly a dominant performance. Seattle had four games, Vancouver had two, and seven other MLS teams had at least one game of championship in a campaign comprised of 26 games.
The competition was declared done for 2019-20 at the end of the MLS is Back Tournament. At that point, the campaign already had stretched to more than a year. Portland, which won the championship, takes it into 2020-21.
All-time, the standings are tight at the top. The way MLS teams have been passing the title back and forth since the summer of 2019, it's hard to tell when a team from the league will join the front runners.
Leading the way right now is Herediano, a Costa Rican club that produced 15 games of championship in 2017-18. Following Herediano are another Costa Rican club, Perez Zeledon, and a Panamanian club, Costa del Este, each with 14. The next position, at 11 games, is shared by UANL of Mexico and Santos de Guapiles of Costa Rica.
Among MLS clubs, LAFC led the way after 2019-20 with eight games, followed by Philadelphia with six, then New England with five. 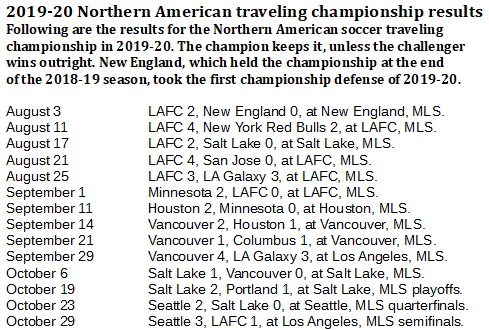