The New York Yankees ripped through the Eastern half of baseball in 2019 to the tune of 35-16, capturing the first season honors in the new East League lineal championship. 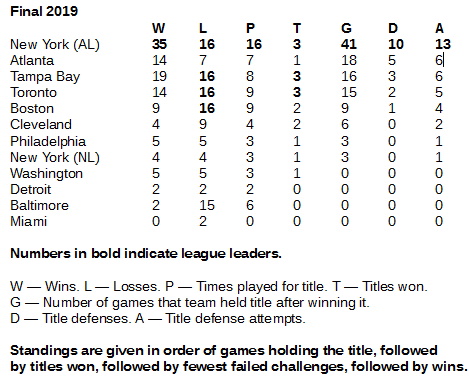 The New York Yankees had a pretty easy time of it for the first running of our Eastern lineal baseball championship, which includes the clubs in our Northeast and Southeast conferences.

The Boston Red Sox, coming off the 2018 World Championship, were deemed worthy of caretaking the Eastern title for a start, but the Red Sox were headed for struggle in 2019, and it began with dropping the new lineal title in their opening series against Toronto.

With four series wins into the second week of May, the Tampa Bay Rays took the early lead. But the Yankees took the title from Tampa Bay by winning two out of three in St. Petersburg May 10-12, then they proceeded to hold the title for four defenses to take the advantage.

After losing two of three on the road against the Toronto Blue Jays to lose the title, the Yankees got it back by sweeping the Blue Jays three games in Yankee Stadium June 24-26. From there, it was five more title defenses for the pinstripes, building up an enormous lead before the All-Star break.

The title finally crossed into the National League when the New York Mets swept three from the Cleveland Indians at Citifield Aug. 20-22. But the Atlanta Braves went immediately into the same park and swept the Mets to gain the championship.

From there, the Braves defended the championship five times until mid-September.

They never had a chance to catch the Yankees, who produced a stately 35-16 record games for the Eastern lineal. The Yankees ended the year with 41 games of championship, by far the most of any team. Atlanta was second with 18. 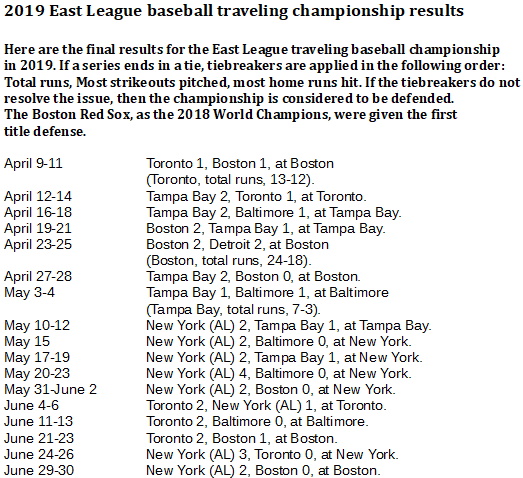 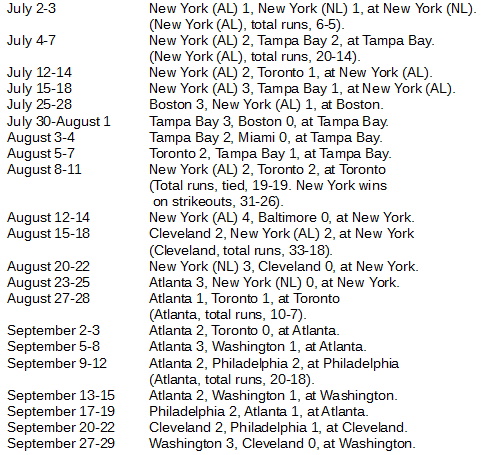