The fight for the North League lineal championship began between the Chicago Cubs and Milwaukee Brewers, but it really ended with the New York Yankees, who put themselves way ahead with two titles and seven defenses in the middle of the summer. 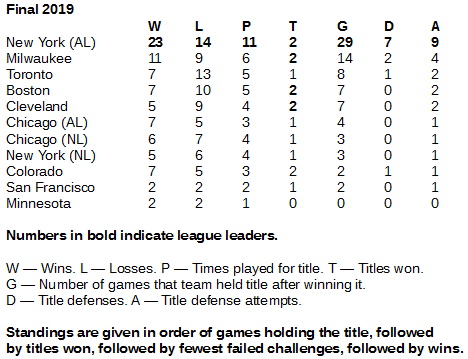 The New York Yankees fell short of their usual aspirations in 2019, bowing out with a six-game loss to the Houston Astros in the American League Championship Series (ALCS).

By the light of the championships chronicled on these pages, though, no one was better in 2019 than the Yankees.

In the two highest level competitions, the First Division and the Super League, the Yankees won the championships. The Yankees also finished a strong second place in the American League and interleague lineal championships.

Then, we have the four-by-four, which places each club in six distinct but related competitions. In future years, we'll say that any team winning three of these will qualify for the next year's Super League, if that club hasn't already qualified through the pyramid or the league-wide lineals. In 2019, the Yankees won four.

Opening these traveling titles in the cardinal regions (north, south, east, west) presented a small challenge, as there is no such thing as a standing champion from established competitions to be the obvious caretakers. So, we tried to be fair and balanced about it, and we all know how that goes.

The Boston Red Sox won the 2018 World Series, so we gave them dibs here started them as the East Champion. The Los Angeles Dodgers, as the National League pennant winners in 2018, were the clear choice as the caretaking West champion.

What about North and South? It's fair to start one in the American League and the other in the National League. The Houston Astros, with 103 wins in 2018, were the obvious choice in the South. So, we're going National League in the North. It happens that the Chicago Cubs and Milwaukee Brewers each won 95, tied for the league's Central Division championship with the best record in the NL. The Major Leagues decided it with a playoff game, won by Brewers.

We decided to do it a different way. Fortunately, the Cubs and Brewers were to start the 2019 season against each other. So, instead of deciding to name one or let the playoff decision from a year earlier stand, we just put the North lineal on the line in that series without picking a caretaker beforehand. Just this once. Because it made the most sense.

The Brewers won that series to open 2019, as well, and defended it once to kick off this championship. In the end, the Brewers were better than most teams in the North, winning two titles for a total of 14 games in the championship.

But that's not the Yankees. Somehow, we didn't pick the Yankees as one of the four clubs to caretaker a lineal in a cardinal region, despite their winning 100 games in 2018 before being bounced from the playoffs by the eventual world champs. The Yankees didn't care about that, of course. They simply went out and won their two cardinals, the East and the North.

In the North, they finished with 29 games of championship. The Yankees did their big damage by winning the championship in mid-June and hanging on through six defenses until the last week of July. 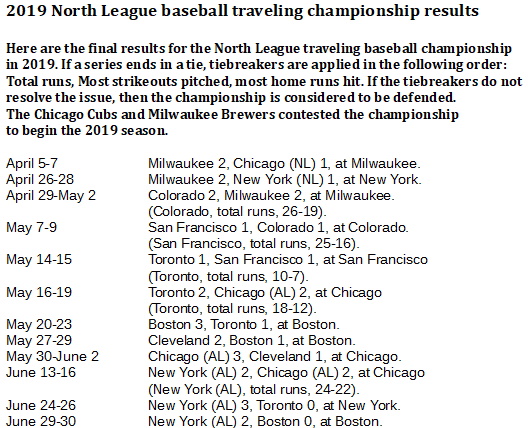 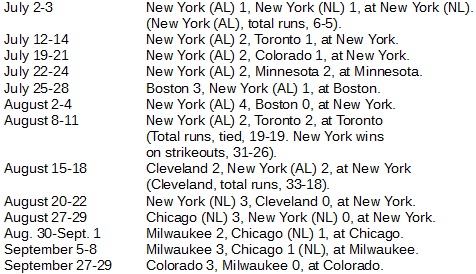