The New York Yankees could have been caught on top of the First Division during the 2019 playoffs, but they weren't. They finished ahead of the Houston Astros and Tampa Bay Rays. 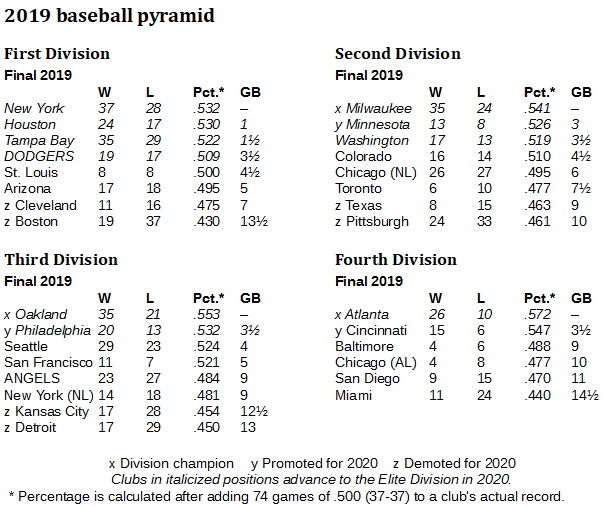 Of all the sports in 2020, none took a worse hit for timing from the coronavirus than Major League Baseball (MLB), which was half into spring training when all went dark in mid-March.
The process of starting baseball again in 2020 was labored, in more ways than one, but the solution landed on playing as, in effect, three separate leagues during the regular season, then as two leagues in the postseason. The season, only 60 games, isn't enough for teams to really get around.
So, we decided to suspend the usual alternative league configurations in baseball for 2020, simply because they weren't played. Same with the traveling championships. As an example, Colorado ended 2019 with the older circuit's lineal championship, but defending it in 2020 would have been a matter of just doing it against the four other clubs in the National League West. What's the point?
The only exception is that we ran the original version of the East, Center and West Leagues, as the compromise schedule in 2020 was accommodating Unlike the MLB season, the regional leagues here actually produced some interesting results.
The 2020 schedule also made the pyramid and the Elite League not feasible. Which means that when we pick these up in 2021, we will pick up from the 2019 results.
Let's, then, review the pyramid from 2019.
In the First Division, the New York Yankees entered the postseason in firm control of the lead. However, by its nature, the First Division is bound to produce many playoff teams and there's no telling in advance how the postseason will change the standings.
It happens that the three leading First Division teams at the end of the regular season – the Yankees, the Tampa Bay Rays and the Houston Astros – all went to the American League playoffs.
Down two games to the Yankees, the Rays had the best chance of catching them in the playoffs. If they could have taken down Houston in the divisional series, even if it took five games, they still could have gone in front of the Yankees by sweeping them in the championship series. It was a stretch.
And it didn't happen, anyway. The Astros eliminated Tampa Bay in the divisional round, so they entered the championship series needing a sweep against the Yankees just to reach a tie at the top. As it worked out, the Astros won the championship series in six games and the Yankees pulled through the postseason with a one-game lead in the First Division.
So, a little drama came to us, but the outcome wasn't much in doubt. The Yankees won the First Division, the Astros rallied to second, the Rays dropped to third after losing their playoff series to the Astros, and the Dodgers finished fourth. All four teams will be in the 2021 Elite League, as the 2020 version was suspended because of adjustments to the coronavirus.
On the bottom of the top division, the Cleveland Indians and Boston Red Sox struggled mightily in the 2019 First Division and now will try their luck in the Second Division as the new relegants in 2021.
The Milwaukee Brewers faced little opposition in the 2019 Second Division, ending with a five-game cushion on top, with the Minnesota Twins and the Washington Nationals behind them. The Twins will join the Brewers in the 2021 First Division. Both, along with the Nationals, will be in the 2021 Elite League.
The Pittsburgh Pirates and Texas Rangers continued their declines in 2019 and finished that season at the bottom of the second tier. They are going to the Third Division in 2021.
The free-agent signing of Bryce Harper didn't help the Philadelphia Phillies into the 2019 National League playoffs. Did it help the Washington Nationals win the World Series? Either way, it might have been the difference for getting the Phillies out of the Third Division. The Oakland Athletics actually won the third tier, with the Phillies in second place, a robust 3½ games behind Oakland.
The Phillies finished a mere one-half game ahead of the Seattle Mariners in the Third Division. That difference matters in these pyramids, because the top two Third Division teams are simultaneously promoted to the next season's Second Division and Elite League, while the third-place club gets neither.
The two worst teams in the American League Central Division, the Detroit Royals and Kansas City Royals, also were the worst two teams in the 2019 Third Division. Each is going to the Fourth Division in 2021.
The winners in the Fourth Division, easily, were the Atlanta Braves, who will be promoted to the Third Division and the Elite League in 2021. The Cincinnati Reds, finishing second in the Fourth Division, will go up to the Third Division in 2021.