The Dodgers, San Diego Padres and San Francisco Giants are among the early leaders in the 2021 race for the National League lineal championship, but the prize rested in the East as the All-Star break arrived. 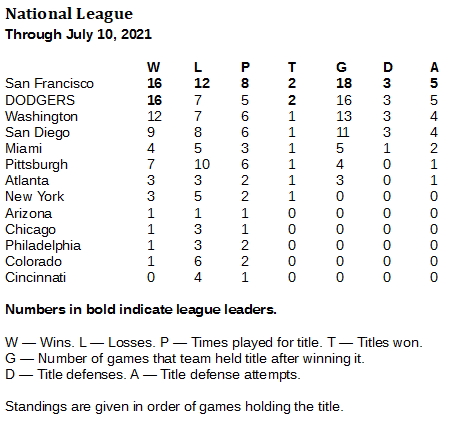 The National League traveling championship spent the first two months of the season on the West Coast, so the Dodgers, San Diego Padres and San Francisco Giants are among the contenders at the All-Star break.
But the break came with the championship crawling along the East Coast, passing successively to the Washington Nationals, the Miami Marlins, the Atlanta Braves and, later, the New York Mets. The Mets are the title holder at the pause, and they will put it on the line at home against the Atlanta Braves July 26-29.
It seems, though, that no team east of the San Joaquin Valley has the goods to sustain a championship streak. Perhaps the Milwaukee Brewers can do it, but they, and the St. Louis Cardinals, are the two clubs in the NL yet to play for this championship.
The Giants controlled the championship for most of a month, from May 9 to June 6, playing for it consistently during that period. In that time, the Giants won the title twice and defended it three times, losing only to a challenge to the Dodgers, but immediately winning it back in a counter-challenge.
Then the Giants ventured to Washington and lost two of three June 11-13. The title has been in the east ever since. 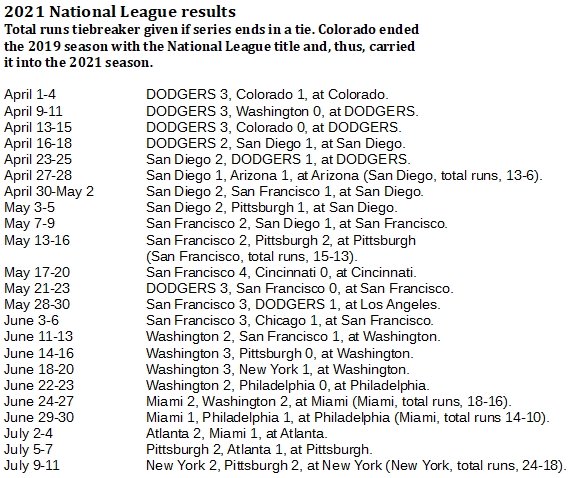