Alabama regained the lineal college football championship for the first time in more than four years, extending its all-time lead in the all-time standings. 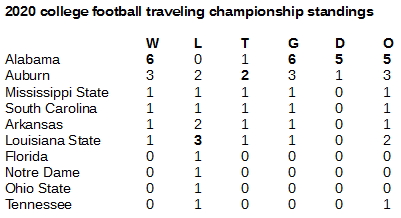 The college football 2020 season was a tough year to be defending the lineal championship.

Unless you were Alabama. Then you just tear out six wins with it all the way through the National Championship Game.

So, Alabama, once more, is our lineal champion at the end of 2020, adding six wins of title. Alabama now is 49-7 all-time playing for the traveling championship as we have followed it from the start of the 1979 season.

We began the title with Alabama in 1979. We have more to say about that here.

As for 2020, the year began with Louisiana State in possession of the championship, but not in possession of quarterback Joe Burrow. Apparently, they didn't possess a defense, either, falling, 44-34, to Mississippi State in the season opener. Due to covid circumstances, there was no non-conference slate to speak of, so the title stayed in the SEC. It was just a matter of time before Alabama got another shot.

The title passed successively to Arkansas, Auburn, South Carolina, LSU, and Auburn before the Iron Bowl in Tuscaloosa with the lineal championship on the line on Nov. 28. There was never much doubt. Alabama won, 42-13, then proceeded to demolish LSU and Arkansas by combined scores of 107-20, ending the regular season.

Florida made Alabama sweat a little in a 52-46 SEC Championship Game, but Alabama won, then mowed down Notre Dame, 31-14, in the national semifinals before putting it on Ohio State, 52-24, in the National Championship Game.

Alabama had last held the title in 2016, a six-game stretch ending with a 35-31 loss to Clemson in the National Championship Game.

The standings for this tracking all-time have Alabama on top at 49 wins, followed by Miami (41-8), then Southern Cal (30-6) and Florida (30-15 with the loss to Alabama). Again, though we've been having second thoughts about how to think about the lineal championships, being more convinced through time of their legitimacy and reality, and following through on this will demand a time-consuming editorial initiative. There's more to say about that, but not here.