At the All-Star break, there is a team to beat for the American League lineal championship, and it is the Houston Astros. With 26 games of lineal title, the Astros have more than the next two clubs, combined. 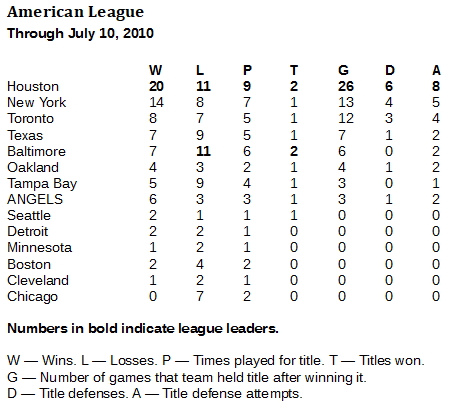 At the halfway point of the 2021 baseball season, the Houston Astros have set themselves as the clear favorites in the American League traveling championship race.
The Astros strung together a title and six straight defenses, holding the championship for almost all of June.
Comically enough, the team that ended it for the Astros, they being the Baltimore Orioles, entered the series in question in a 9-38 nightmare, then swept the Astros three straight in Houston June 28-30.
Baseball is weird. The Orioles, of course, immediately dropped the championship to the Angels. The Orioles won an earlier title in April, before all the losing started, but they failed to defend that one, as well.
Oddly, then, the Orioles and Astros are tied on top of the league in lineal championships for the year, each with two. However, the Orioles couldn't defend either one, while the Astros defended their second title six times. Thus, the Orioles have six games of championship, but the Astros have 26.
The New York Yankees and Toronto Blue Jays are next in line to the Astros. However, the Yankees have 13 games of title, half as many as Houston, while Toronto has 12. 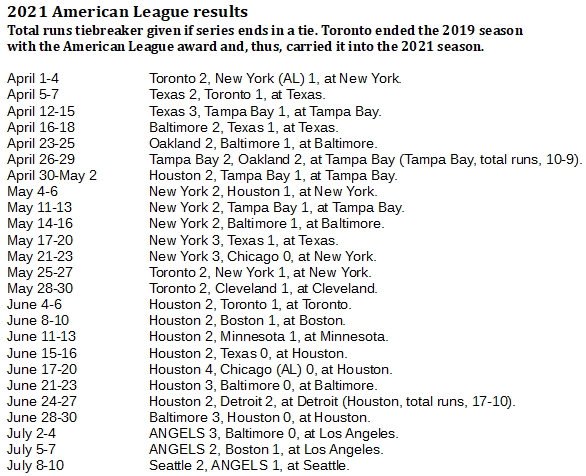