The storied Lakers became the last of the original Fourth Division teams to escape in 2019-20, easily winning the bottom tier. By an even greater margin, the Clippers won the First Division. In the very end, of course, the Lakers won the NBA championship. 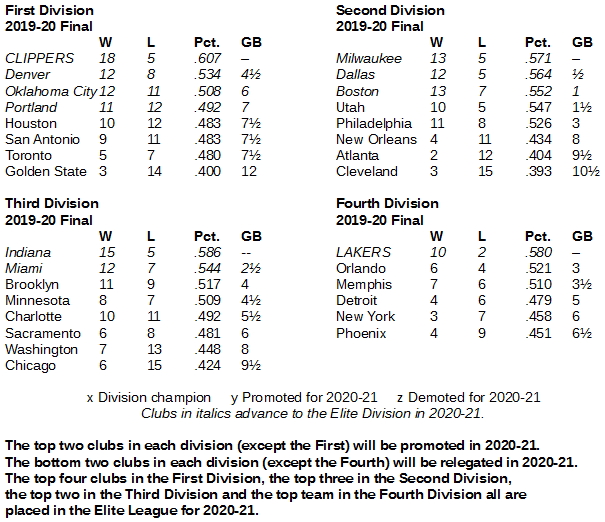 Pro basketball resumed after the pandemic in 2020 with arrangements that worked well enough for the pyramids, under the circumstances.
It turns out that the teams lopped off of the resumption for their weakness in the NBA standings also were, by and large, the weakest teams in the pyramid. They were not  missed.
Thus, in the Fourth Division, we already knew when play resumed in July after the March shutdown that the Lakers had it won, and they became, finally, the last team from the original Fourth Division in 2015-16 to rise from the basement.
The divisions were set for that first year by simply taking the four best records in each conference from the year before and putting them in the First Division, then putting the next four of each conference into the Second Division, etc. Left with only six teams for the Fourth Division, those teams were the Lakers, the Orlando Magic, the New York Knicks, the Minnesota Timberwolves, the Philadelphia 76ers and Sacramento Kings.
None of these teams has taken over the NBA in the last five years. The best in the pyramid is the 76ers, who rose to the Second Division and the Elite Division in 2019-20 after two seasons of improvement. The Timberwolves finally rose to the Third Division and the Elite Division in 2019-20, with disappointing results. The Magic has never made it past the Third Division and is back at the bottom this year, but will be promoted with the Lakers in 2020-21. The Kings have risen to the Third Division and are fighting to stay there. The Knicks have moved up to the Third Division and now they are back on the bottom level.
So, the Lakers finally are getting out, and they're also going to the Elite Division in 2020-21 as this year's Fourth Division champ. And that's all there really is to say about the bottom tier, because there were no games on the resumption schedule, which leaves out the Knicks and Detroit Pistons completely.
There was little more to be decided in the Second and Third divisions, but the First Division was loaded. Though the Clippers won the championship with 4½ games to spare over the Denver Nuggets, a frantic race simultaneously reach the Super League and avoid relegation involved five teams.
The winners in that scrum were the Oklahoma City Thunder and the Portland Trail Blazers, who finished third and fourth, respectively, in the First Division and qualified for the Super League. The Houston Rockets and San Antonio Supers finished in intermediate positions, fifth and sixth in the First Division, respectively, meaning they get to remain in the First Division for 2020-21, but will not go to the Super League. The losers were the Toronto Raptors, who finished seventh and are being relegated, along with the Golden State Warriors.
Only two games remained in the Second Division when the season resumed in the bubble, and the Dallas Mavericks won both, defeating the Milwaukee Bucks and the Utah Jazz. With that, the Mavs rallied to a second-place finish in the Second Division, one-half game behind the Bucks, thus securing a First Division promotion and a Super League berth.
The Jazz fell to fourth and out of the money. The Boston Celtics finished third, which is good enough to join the Super League, but not the First Division. The obvious relegants from the Second Division were the Atlanta Hawks and the Cleveland Cavaliers, neither of which received even an invitation to the bubble.
In the Third Division, the Indiana Pacers and Miami Heat went to the bubble all but certain as the two teams that would be promoted and sent to the Super League, but slight question remained about who would win the division. It turned out to be the Pacers, by 2½ games.
On the bottom of the Third Division, and headed to the Fourth Division for 2020-21, were the Washington Wizards and Chicago Bulls.