North Dakota State's national dominance in playoff-level major college football certainly impacted the first five years of this traveling championship. The Bison have won more than half of the games contesting the title. 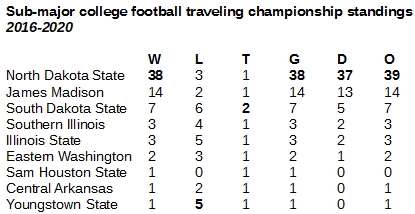 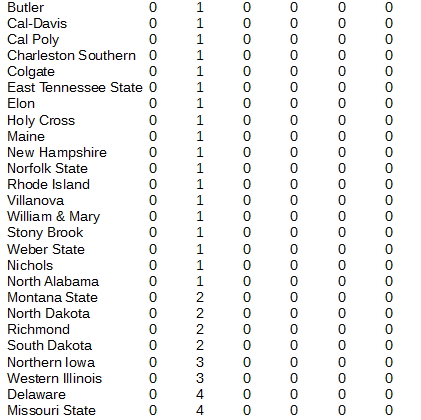 We started tracking a lineal national football championship in the playoff level of the high college game in 2016, but never have gotten around to saying so.
Anyway, we've got five years of it now, and, like a lot of these, the standings at this point reflect the dominance of the team that happens to be dominant at the beginnings of these histories. We've started all but one of these championships (United States pro rugby) in mid-stream, at some time well past the true start of competitive history.
We might guess, based on the credentials of the teams who are assigned the first defenses, that we're getting it right at least a lot of the time. That is, the team we're giving it to, a lot of times – don't even know if it's most times – is the team that would actually have it if we had started at the beginning of time and played it through. Especially in competitions where tournaments determine league champions.
We would love to go back to the beginning of time with this secondary level of major college football. That would mean going back to 1978. We may do that some time.
If we did, though, if we went back to the very start of the playoff subdivision, which used to be called Division IA, and play out the traveling championship through the ensuing history of scores, we're pretty certain that the lineal champion entering the 2016 season would have been North Dakota State.
The reason we say that is because North Dakota State, in the previous five seasons, won five national championships with a total combined record of 71-5. And given the structure of FCS football, with a few ultra-strong conferences and four rounds of playoffs, the best teams play each other a lot. And North Dakota was the defending national champ entering 2016.
It happened that North Dakota State held the caretaker title for only four games before losing to South Dakota State. So, it's not like the first defense here staked North Dakota State to a huge lead.
But North Dakota State still has a huge lead through five years of this championship, claiming 38 games of title (out of 70 games total), compared with 14 for the next best team, James Madison.
At the end of the 2020 season, we have a brand new champion in a league that has never been here before, Sam Houston State from the Southland Conference.
A little look, year by year: 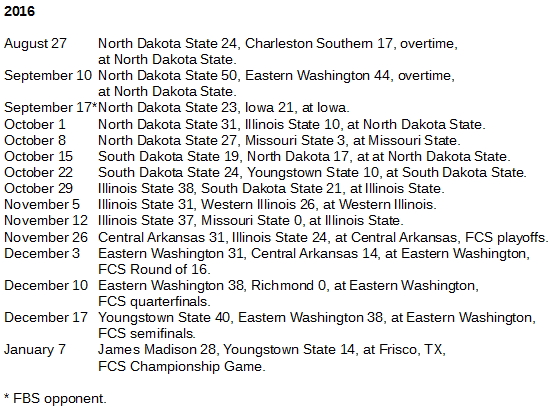 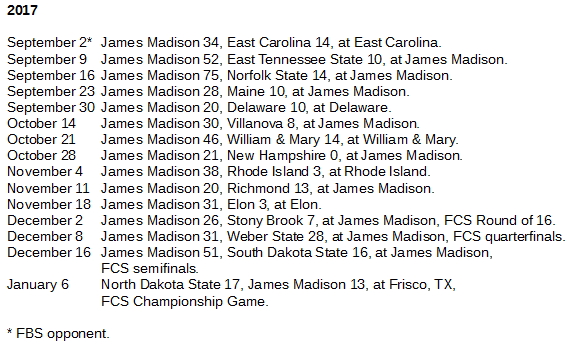 Here, again, we have an early win for our playoff-level lineal champ against a bowl-level team, with James Madison taking down East Carolina. James Madison tore through 13 title defenses in 2017, subjugating the Colonial league and the playoffs, taking the all-time lead with 14 games of championship.
But in the FCS Championship Game, the Dukes ran into North Dakota State, trying its first challenge since losing the caretaker. Nice game, 17-13, North Dakota State winning. 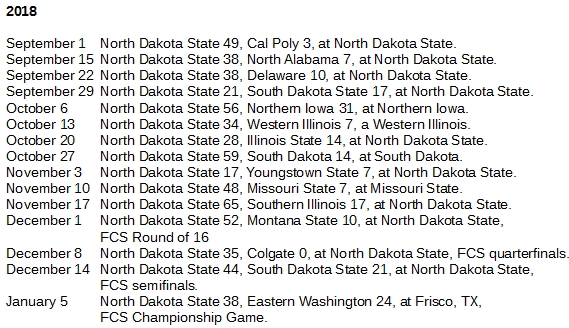 '
So, now North Dakota State is getting serious, and the results for the rest of the playoff level were going to come up short of the national championship. The Bison won all 15 of their games, repeatedly registering five-touchdown victories all the way into the playoffs.
The Bison probably could have kept on winning, but it had to end with the national championship game, a 38-24 win against Eastern Washington. 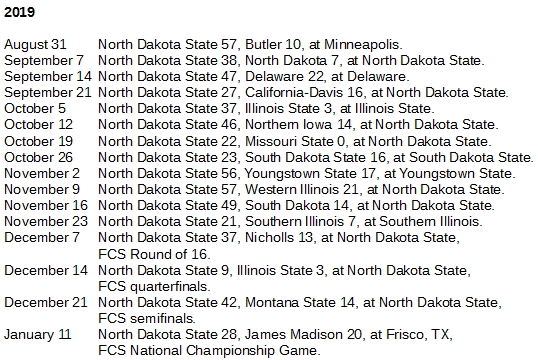 Come to think of it, the Bison did keep on winning. Here, it's 16 games, again, by consistently lopsided scores. The only teams that can stay in sight through three quarters are South Dakota State and Illinois State.
The 2019 season ends with a test, a National Championship Game against James Madison, but the Bison prevail, 28-20, for their 32nd consecutive game of lineal championship and their 36th game all-time.

The 2020 season went down strangely, due to coronavirus. Games across the playoff level were played as early as October and the championship tournament didn't occur until May.
North Dakota State won the game it played in October, and won again in February before falling to Southern Illinois. The Salukis put up two defense before losing big to South Dakota State on March 20.
The Jackrabbits kept the championship for four defenses before falling in the National Championship Game, 23-21, to Sam Houston State.