Stanford finished 2020-21 with the long version of the women's college basketball traveling championship, which actually did travel, for once. The championship, confined to the eastern United States for five years, finally appeared in the Midwest and on the West Coast. 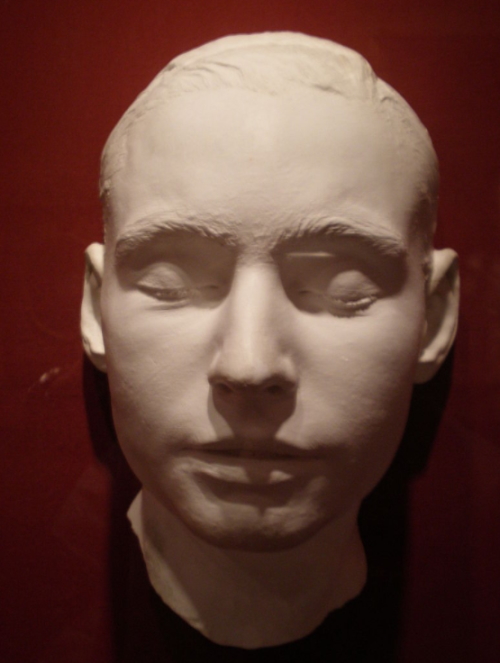 Stanford University is named for Leland Stanford, Jr., who died at age 15 from typhus. His death mask is on display at the university (BrokenSphere/Creative Commons Attribution/Share Alike 3.0 Unported license).

Quite simply, the 2020-21 season in the women's college basketball traveling championship was the most wide-open and interesting of the six so far.

In the first five years of tracking this lineal, it changed hands a total of eight times. During the same five years, the men's long lineal flipped 56 times.

In 2020-21, alone, the women's long lineal flipped nine times, more movement than in the previous five years combined. The men's long changed 16 times in 2020-21, but that was record, crazy movement in a record short 29-game campaign. 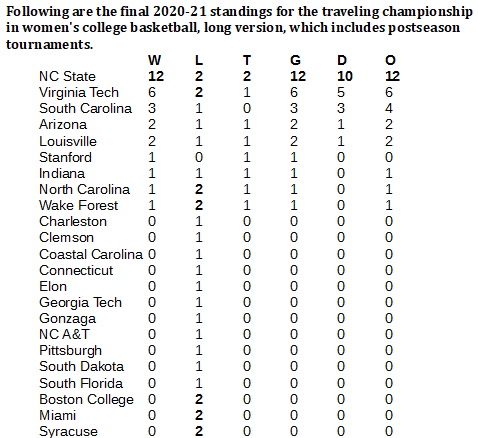 On Dec. 3, South Carolina, a two-time lineal champ, was defending the second one for the 28th time, on its home court against North Carolina. A win would move South Carolina into a tie with Connecticut and Baylor all-time at 35 games of title in the period since Connecticut became beatable, going back to its NCAA semifinal loss in 2017. Before then, Connecticut defended this title as the caretaker 73 times. So, there's no question everyone else has a long way to go to catch Connecticut at 108 historically.

In the period since that loss, Connecticut still is tied with Baylor for the lead at 35, and South Carolina needed a win at home against North Carolina State to join that tie. But North Carolina State won that game on Dec. 3, 54-46, then embarked on a seven-game defense to claim the best performance of the season with this title, which never stayed anywhere else for as long.

Virginia Tech needed overtime to take the championship from North Carolina State at home on Jan. 28, then defended it five times before losing to North Carolina on the final day of the regular season.

In the Atlantic Coast Conference Tournament, Wake Forest snagged the title from North Carolina, then lost to Louisville, which hung on for one defense, until the championship game against North Carolina State. There, the Wolfpack prevailed again, taking the title to the NCAA Tournament.

North Carolina State held onto the title through the first two rounds of the national tournament, taking it to the Sweet 16, where Indiana became the new lineal champ – and the first from the Big Ten – with a 73-70 win. Arizona defeated Indiana in the next round, setting up a national semifinals match with UConn.

A win for UConn, followed by good winning streak, would have rather emphatically re-asserted its dominance in this championship by any historical partitioning. But Arizona won the game, 69-59. Connecticut remains at 108.

A Pac-12 final between Stanford and Arizona went to the Californians in a thriller, 54-53. Stanford now holds the championship entering the 2021-22 season. 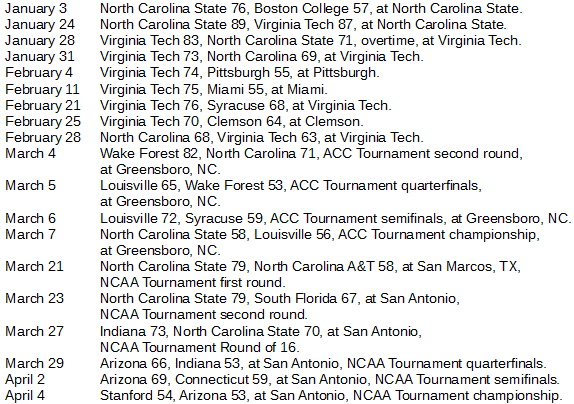