Oddly enough, the long version of the men's college basketball traveling championship spent the conference portion of 2020-21 in the Big East, yet Villanova never played for it. Thus, the Wildcats didn't extend their all-time leading win total of 27. The best team of the year in this chase was Connecticut. 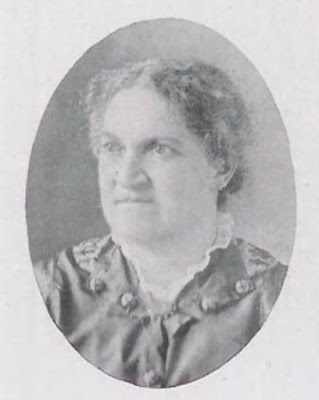 Edna Maud Whitney, the First Lady of Mansfield, was the first librarian at the University of Connecticut. She died in 1970, age 102 (public domain image). 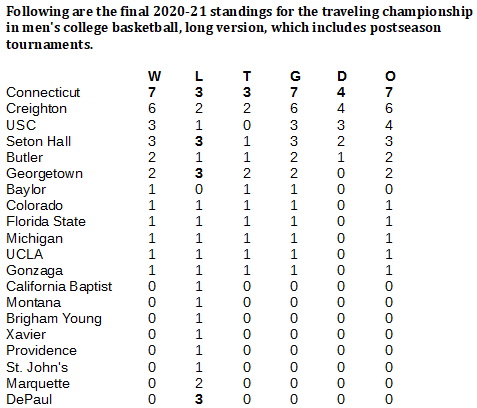 So, in the 2020-21 men's college basketball long lineal, we saw 11 teams win the title  a combined 15 times, and that's not counting the team that entered the season with the title and lost it. The championship changed hands 16 times in a 29-game campaign.
We've never seen anything like it. Ordinarily, this championship might turn over 10 or 12 times, but it's taking 40 games for it to happen.
Another peculiarity: This championship spent the conference portion of the season in the Big East for the first time since 2016-17, when Villanova piled up 23 games of title on its way to the all-time lead, which is 27 through six years of tracking. Yet, Villanova never got a chance to play for the championship in 2020-21.
Of course, with coronavirus concerns, November and December, when the intersectional games normally happen, didn't happen so much. USC held the prize entering the season and beat a couple of Western teams before venturing at the start of December to Uncasville, CT, a Mohegan casino town with a basketball arena. There, the Trojans defeated Brigham Young before losing to homestanding Connecticut.
Seems odd, perhaps, that Connecticut had never before played for the long lineal, which did, after all, spend all of 2016-17 in the Big East. The Connecticut women's teams have all but put both versions of the all-time women's championship in cold storage. But the men had never played for it.
In 2020-21, though, the Connecticut men had the best year of anyone in the long version, winning three different championships covering seven games. But all of that didn't come until later. Connecticut didn't play for almost three weeks after beating USC, then came back with a loss to Creighton, which tacked on four title defenses.
After that, it was a roller coaster. Connecticut won it's third championship in late February, beating Georgetown, then held on for four defenses before falling, again to Creighton, in the Big East semifinals.
But Georgetown beat Creighton in the conference championship to take the long lineal to the NCAA Tournament, and from that point through the end, the championship was never successfully defended. It passed successively to Colorado, Florida State, Michigan, UCLA, Gonzaga and Baylor.
The biggest game of the season in this title, and the best of the year by any measure, was the NCAA semifinal game between Gonzaga and UCLA. Gonzaga obviously didn't put the short version on the line, but UCLA went in with the long version, and that was on the table.

Gonzaga's win, 93-90, in overtime, unified the short and and the long versions for the first time since the 2016 postseason, when they first broke apart.

Of course, Baylor easily prevailed in the championship game against Gonzaga, so the titles came right back apart. Gonzaga still holds the short version entering 2021-22.

In the big picture, the historical standings (six years, 2015-16 through 2020-21), Michigan's win brought it's total all-time to 24, breaking a third-place tie with North Carolina. Villanova still leads with 27, followed my Michigan State (26), Michigan (24) and North Carolina (23).
Creighton added six games of championship in 2020-21 and is up to nine all-time, which is where UCLA is with it's win in the NCAA Tournament. Both moved into a tie with Virginia for fifth. That means Wisconsin, which has eight, now is eighth on the all-time list. 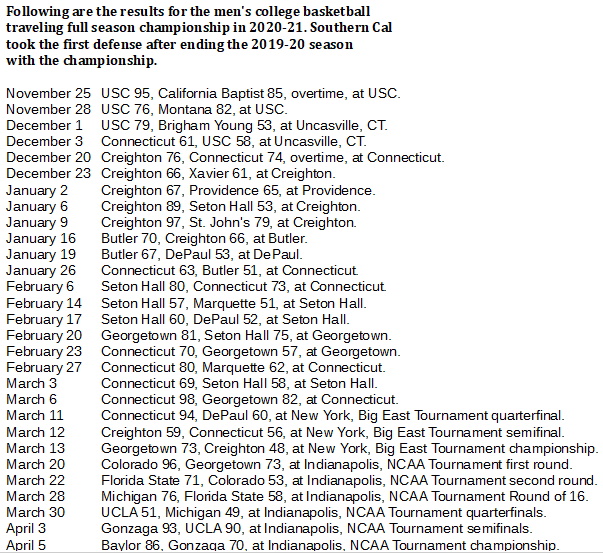