The first running of the Elite Division in pro basketball produced a race on top between the Denver Nuggets and Milwaukee Bucks that went deep into the bubble. Three other teams went to the bubble with a chance. 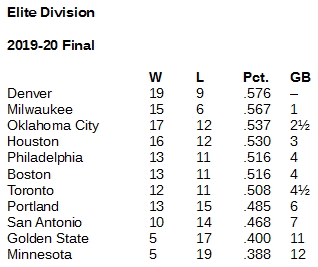 The first year of the Elite Division in pro basketball, 2019-20, was everything the promoters promised, including a squeaky tight race between the top two teams and five of the 11 teams in the group still mathematically contending as the NBA resumed play in the Orlando bubble during the coronavirus pandemic.

The Denver Nuggets held a one-half game lead on the Milwaukee Bucks entering the bubble and wound up finishing ahead of the Bucks by one game. The Houston Rockets, Oklahoma City Thunder and Philadelphia 76ers all went into the bubble with at least a slight chance of catching the Nuggets.

The last two teams entered in the 2019-20 Elite Division were the Minnesota Timberwolves, who won the Fourth Division last year, and the Golden State Warriors, who won the lineal championship. Combined, they were 10-36 this year against the elite competition. And they were kept out of the bubble.