The Boston Red Sox came to the All-Star break leading their Northwest Conference and each of its divisions in the four-by-four. Every other conference is dividing the goodies up, at least a little. 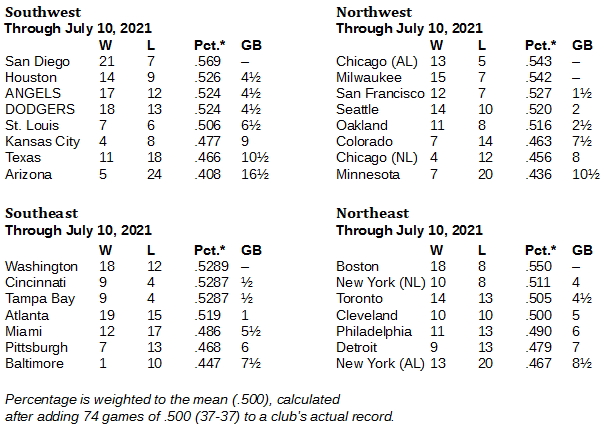 We turn four-by-four at the All-Star break in 2021 and find, among the four conferences, two outstanding races and two non-races.
Among the non-races is the arrangement in the Southwest Conference, where the San Diego Padres won three-fourths of their games to reach the break 4½ games ahead of the Angels, Dodgers and Houston Astros.
In the Northeast Conference, the Boston Red Sox are the only club that wins with any regularity. They were 18-8 at the break, four games ahead of the New York Mets.
Then again, two good races.
In the Southeast, we have the Washington Nationals holding a slim lead of ½ game and two ten-thousands of a percentage point (weighted) over the Tampa Bay Rays and Cincinnati Reds.
And in the Northwest, the Chicago White Sox were one thousandth of an adjusted point ahead of the Milwaukee Brewers.
Of course, each of these conferences also functions as a division in two of the four associated leagues, and those standings tend to be different. Once again, at the 2021 All-Star break, they are.
The Southwest Conference, for example, also is the Southern Division of the Western League and the Western Division of the Southern League.

In the Western League, Southern Division, the Padres are not dominating, but sitting in third place, looking up at the first-place Astros and the second-place Dodgers, who were ½ game behind. The Padres were 2½ back.
In the North Division, we found the Brewers winning two of every three games to hold a one-game lead at the break over the San Francisco Giants, with the White Sox 2½ games down.
In the Southern League, West Division, the Padres have even less competition than they have in the conference. They reached the break four games ahead of the Dodgers and seven ahead of Houston.

Across the league, in the East Division, the Rays held a two-game lead over the Atlanta Braves. The Nationals and Reds, tight contenders in the conference, were four and five games back, respectively, in the Southern League.

In the East League, South Division, the Rays are having a much easier time than in either the conference or the West League, bolting to an All-Star break lead of five games on the Reds and Nationals. On the North side of the East League, the Red Sox held a four-game lead on the Toronto Blue Jays. The Mets, four games down in the conference, fell all the way to 10 games down in the Eastern League.
The Red Sox were the only team reaching the All-Star break with the lead in their conference and each of their four-by-four league divisions. They led the East Division of the North League by 3½  games on the Mets.

In the West Division of the North League, the White Sox led the way by 1½ games on the Giants, two on the Oakland Athletics and 3½ on the Brewers.