The short version of the women's college basketball lineal championship has been, by far, the most stagnant of any on these pages. In 2020-21, we finally saw a little bit of movement. What's next?

In the first five years of the women's college basketball traveling championship, the short version that includes only the regular season, the title changed hands only two times.
In 2020-21, the sixth year of the championship, it changed hands three times. Perhaps there is a new balance coming to the women's college game. It would certainly be a change.

The lead team for the year was North Carolina State with nine games, followed by Virginia Tech with six and South Carolina with three. Each was on its first championship, and they're all well behind the all-time leader, Connecticut, at 97.

Another new wrinkle is that the short and long versions each have different champions on different sides of the country entering 2021-22, with Stanford holding the long title. The two titles previously came apart at the end of the 2016-17 season when Connecticut lost in the NCAA semifinals, losing the long version but holding the short one. UConn simply reconnected the two titles early the next season. 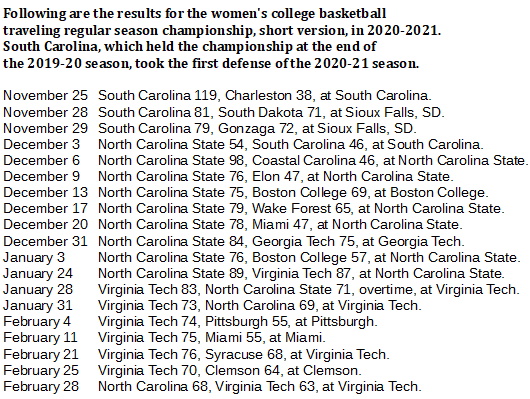