It was hard for the Dodgers to get into the Super League, but now that they're in, they've taken a pretty easy draw to the league lead at the 2021 All-Star break. 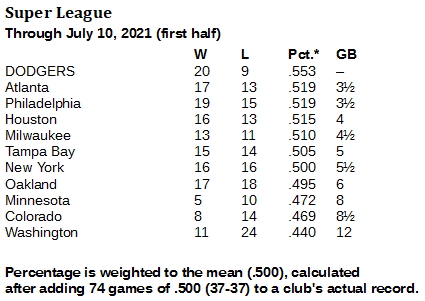 By couple of whiskers, the Dodgers missed out of the first season, 2019, of what we then were calling the Elite Division, but now are calling the Super League.
The Dodgers finished fifth in the 2018 First Division and barely lost out on the National League traveling championship. In each case, their downfall was the Arizona Diamondbacks, who finished barely ahead of the Dodgers in the First Division and the traveler. The main culprit was Arizona's 9-4 record against the Dodgers in games for the lineal title.
The Dodgers crept into the Super League for 2020 with their fourth-place finish in the 2019 First Division. Of course, we didn't actually play the Super League in 2020 (coronavirus, and all of that), so the 2021 Super League really is the 2020 Super League, a year late.
Here, the Dodgers received a quite favorable draw. They came to the All-Star break 20-9 in the Super League, first place. This occurred largely because about half of their games, 14 of them, came against the bottom two teams in these Super League standings, the Colorado Rockies and Washington Nationals. The Dodgers were 13-1 in those games, so 7-8 against the rest of the Super League.
Hard to argue against the Nationals being in this Super League. They did, after all, win the World Series in 2019, the year from which they qualified. But we're picking it up two years later, rather than the usual one, and the Natties aren't the same team.
The Rockies aren't one of the illustrious teams in the game, but they have been in both Super Leagues, 2019 and 2021, qualifying the first time in the pyramid and this time with a lineal championship. They barely finished last in the 2019 Super League (then called the Elite Division) by our adjusted winning percentage, but ended up one-half game out of the basement in that column, buttressed by the Boston Red Sox. This time, they are buttressed by the Nationals.
There's still a race here, but barely. The Dodgers had 23 games remaining in the Super League, 12 of them against Colorado. They also were slated for two games with the Houston Astros, three with the Philadelphia Phillies, three with the Atlanta Braves and, at the very end of the season, three at home against the Milwaukee Brewers. Those last four named are the next four teams in the standings, all coming to the break between  3½ and 4½ games behind the Dodgers.