Anadolu Efes dominates 2019-20 Euro traveler, so long as it lasts

They only played 28 of 34 rounds of Euroleague games in 2019-20 because of the coronavirus pandemic. Of those 28 rounds, Istanbul power Anadolu Efes held the Euro basketball lineal for 13 of them. 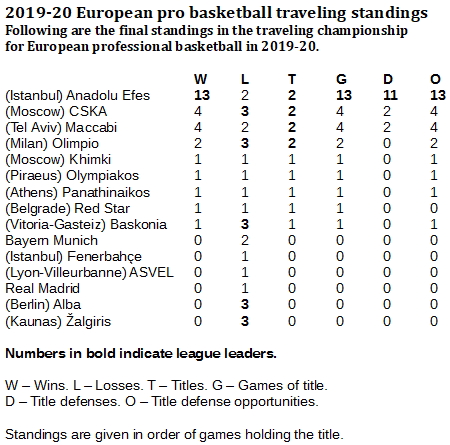 They stopped playing basketball in the Euroleague after the games of March 6, 2020, due to the coronavirus. The season ended at 28 games, a little short of the 34 that were in the plans.
They didn't run playoffs, either. They didn't declare a champion. They just ended it.
One team that might be relieved is Fenerbahçe, the Istanbul club that went to the Euroleague Final Four five years running before play ended in March 2020. At that point, Fenerbahçe was having quite a fight of defending its Euroleague championship, sitting eighth and barely in the playoffs. There's a good chance Fenerbahçe would have missed the playoffs completely.
Another Istanbul team with something to cheer for 2019-20 was Anadolu Efes, which held a two-point lead in the Euroleague over Real Madrid and Barcelona when play halted for 2019-20. They can always say they finished first, though the league won't.
Efes also dominated the lineal championship going through Europe, holding it for 13 of the 28 rounds of games. Anadolu held a five-game championship in November and December, then an eight-game title that began in January and ended in Tel Aviv on March 4, a 77-75 loss to Maccabi.
The Tel Aviv five immediately lost the traveler in its next outing at Belgrade, where homestanding Red Star produced a 92-76 victory and its first lineal title of the season. That happened on the night of March 6. After that, there were no more games.
Thus, Red Star held the European basketball lineal entering the 2020-21 season. 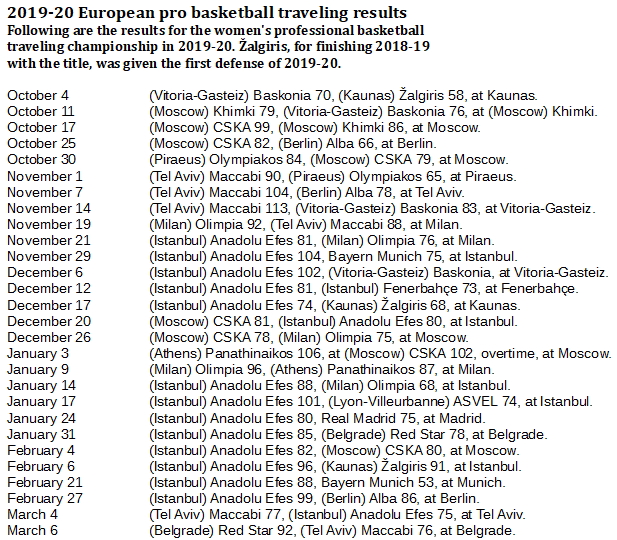