Barca wins another Spanish Big Six in 2019-20, but Real closes in

Of all the new divisions to come from the divisions of top domestic leagues into internal pyramids, the Spanish Big Six is the toughest place to win a game.

We won't weigh in on which domestic league across the world is the best, but we will point out that when we parse some of these into internal pyramids, the Spanish Big Six is as brutal as it comes.

First two years we ran the Spanish Big Six, nobody could win half of its games. In 2019-20, our third year, two teams finally reached that threshold (Barcelona and Real Madrid), just by a little.

Barcelona and Real Madrid both finished 6-3-1. Head-to-head, Real Madrid won 2-0 in Madrid and they drew, 0-0, in Barcelona. However, the tiebreaker here is goal differential, and Barcelona has a nice cushion, plus-15 to plus-10. Thus, Barcelona wins its third straight Spanish Big Six title out of three that have been manifest in these pages.

Atlético Madrid and Sevilla are the other Spanish Big Six survivors. Atlético Madrid is the only team besides Barcelona and Real Madrid to appear in all three editions of the division, and they all will be in the fourth for 2020-21. The top four in the La Liga standings for 2019-20 are the same teams as this Big Six top four, but the order there puts Real ahead of Barça.

The Big Six was a little too fast and thick for Eibar and Real Betis, which both are headed to the Middle Six. Coming up from the Middle Six to the Big Six are ... so now we have to backtrack for a moment.

The Spanish Middle Six standings reveal that the winner is Leganés, which lost only once in ten games and racked up three wins and two draws in five road games. The Cucumber Growers finished more than a win better than second-place Real Sociedad. Clearly, Leganés deserves promotion to the Spanish Big Six.

But ... say, what? You mean that across La Liga, Leganés stunk up the joint so badly that it's being kicked down to the Segunda Division? You mean, the team that couldn't be handled by anyone else in the Middle Six managed only two wins and nine draws against 17 losses against the other clubs in the domestic league?

So, what do we do with the pyramid? First, Leganés will be demoted here, not promoted. Next, we were going to demote the Big Six last-place team, Real Betis, and promote the Middle Six second-place team, Real Sociedad, and there's no reason not to, so we will. Now, we choose our poison: promote a third-place team, or fail to demote a seventh-place team? Do we promote Athletic Bilbao or do we reprieve Eibar?

In these cases, we like it decided on the field (always good to remember that anything happening during the season can always turn up in a tiebreaker). When Bilbao and Eibar played at Eibar, 2-2 draw. At Bilbao, 0-0 draw. It goes to Bilbao, on away goals. Bilbao gets promoted to the Big Six with Sociedad, while Eibar gets demoted to the Middle Six with Betis.

It's unusual to demote a team from the top of some division. Does it mean we no longer demote two teams from the bottom? We have to make that decision the same way in the transition between the Middle Six and the Little Six(ish).

The bottom two teams in the Middle Six were Villarreal and Espanyol. Somehow, Villarreal finished fifth in La Liga and fifth in the Spanish Middle Six. The pyramids are nuts, sometimes. We're demoting Leganés, which then will be washed out of this pyramid when the domestic divisions change over. We know Espanyol, clearly the last-place team in the Middle Six, also will be demoted and washed away (Espanyol finished at the bottom of the La Liga table). We also know that the top two Little Six(ish) teams, Granada and Getafe, will be promoted. 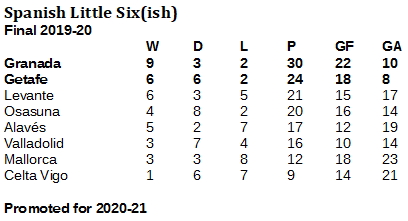 Villarreal, by the way, was not a dud team by any stretch, qualifying for the Europa League at the group stage. And Villarreal would actually have been demoted to the Little Six(ish) if Leganés, somewhere in La Liga, had been able to knock in one goal to turn a draw into a win and edge out of the league-wide relegation zone.

Interesting. But it's a very strange league. And a great one.