Bayern Munich never wins the German Big Six easily, but always ends up winning it. In 2019-20, the Bavarians had a new challenger, Eintracht Frankfurt.

Bayern Munich won its third German Big Six title in three tries, ending another thrilling campaign for this German internal pyramid. Like the first two Big Six championships, this 2019-20 version was a narrow escape for the Bavarians.
As we entered this third year of the German Big Six, four teams were in it for the third time – Bayern, Borussia Dortmund, RB Leipzig and 1899 Hoffenheim. But when covid shut down German soccer in March 2020, the Big Six leader was an interloper, Eintracht Frankfurt, standing 4-2-2 with 14 points, while Bayern was 3-3-2 and 12 points.
Each team had two Big Six games left, and one was head-to-head. They played that game May 23, and Bayern crushed Eintracht, 5-2, in Munich. Three days later, Bayern went to Dortmund and dropped Borussia, 1-0. With that, Bayern was done for the year in the Big Six with 5-3-2, 18 points.
On June 12, Leipzig went to Hoffenheim and turned up a 2-0 win, improving its station to 4-4-1, 16 points. One Big Six game remained, three days later, in Leipzig against Dortmund. With a win, Leipzig would win the Big Six championship.
Dortmund scored at the 30-minute mark of the first half, and that was all the scoring until extra time at the very end, when Dortmund scored again, both goals by Erling Braut Haaland. Thus, Bayern Munich won the Big Six, once again. The win for Dortmund also ensured that it would be spared relegation to the Middle Six.
Instead, Hoffenheim is going down, for the first time, along with Hertha, the 2018-19 Middle Six champions and the 2019-20 Big Six cellar dwellers. 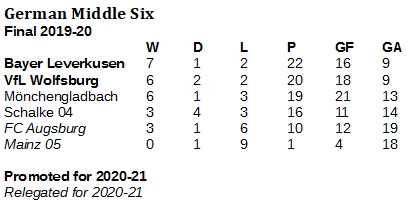 Coming up from the Middle Six will be Bayer Leverkusen and VfL Wolfsburg. Leverkusen is our yo-yo team between the Big Six and Middle Six, alternating between them annually. Wolfsburg was our wooden spoon in 2017-18, the last place team in the Little Six. But the Wolves rallied to second place in the Little Six a year later, and now they have earned promotion to the Big Six as the Middle Six runner-up.
On the bottom of the Middle Six, obviously Mainz had a tough time of it. Against the rest of the Bundesliga, Mainz won 11, drew three and lost 10. Now, this is a tough Middle Six. Borussia Mönchengladbach qualified for the Champions League, while Leverkusen and Wolfsburg both qualified for the Europa League. But no wins? We'll note that against the top four Big Six teams – Bayern, Dortmund, Eintracht and Leipzig – Mainz was 3-5.
But the Middle Six assignment isn't about beating Bayern, Dortmund, Eintracht and Leipzig. It's about beating Mönchengladbach, Leverkusen and Wolfsburg, and Mainz couldn't do it. So, Mainz drops down to the Little Six, along with Augsburg.

Union Berlin won the German Little Six and moves up to the middle. Werder Bremen gets the second-place promotion in a goal-differential tiebreaker over FC Köln. The promotion could have gone to Köln, because Bremen finished 16th in the Bundesliga and needed to survive a relegation playoff to remain in the circuit. Bremen handled it well enough, splitting two legs with FC Heidenheim and prevailing on away goals.