A scalding race in the 2020-21 Euro Big Six ended in a tie between Anadolu Efes and CSKA. But the Muscovites prevailed on a tiebreaker, thanks to a 35-point win over the Turkish squad in December. 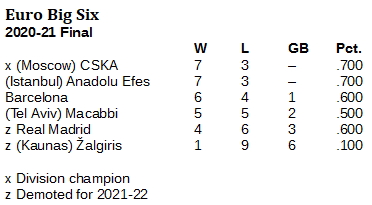 The championship race in the top division of the European basketball pyramid looks quite closer than it actually was. It certainly looks close. CSKA and Anadolu Efes finished tied for first at 7-3.

Anadolu Efes went to Moscow last Dec. 15 in a two-loss funk to face a CSKA squad that had won eight straight games in the Euroleague. The Red Army five was in no mood for lenience against their reeling rivals and rang up a 100-65 win.

With that, Efes fell to 1-2 in the Euro Big Six, while CSKA stood 4-1 and Barcelona, the only team to beat CSKA, was 3-0. A week later, though, Macabbi beat Barça 68-67, in Spain. A week after that, Efes beat Barcelona in Istanbul, and, perhaps, was getting in the hunt. But the Efes fell the following week, against Real Madrid.

On Jan. 15, Barcelona beat CSKA for the second time, this one in Moscow, making CSKA 5-2 and Barcelona 4-2. That was the race. Then, Efes beat Barcelona in Spain, bringing Efes to 3-3 and Barcelona to 4-3.

When the Efes prepared for their return match with CSKA in Istanbul on March 4, the Euro Big Six race had nothing to do with them. CSKA was 6-2, Barcelona was 5-3 and Anadolu was down there at 3-3. And even if the Efes could somehow end up in a tie with CSKA, how were they going to beat that 35-point differential from Moscow?

The Efes gave it a good crack, ever mindful that the Russian team had spanked them pretty good. The home team led, 55-28, at halftime and had the margin up to 30 at the end of three quarters. A three-pointer by Shane Larkin made it 97-64 for Anadolu with 1:41 left. With one more three-pointer, they would have broken the tiebreaker.

Didn't happen. Anadolu Efes won, 100-70, but they still were five points down in that tiebreaker, and that was starting to look like it might matter, because now CSKA was 6-3, Barcelona 5-3 and Anadolu 4-3.

As the weeks went by, Efes kept winning. When March 30 arrived, CSKA was done in the Big Six at 7-3, while Efes and Barcelona each was 6-3. On that day, though, Efes ran Real Madrid off the court in the Spanish capital city, while Barcelona suffered a wrenching overtime loss, 99-94, to Macabbi in Tel Aviv.

So, the numbers were in with Efes and CSKA tied on top at 7-3, but CSKA winning the head-to-head tiebreaker by five points. If Barcelona had beaten Macabbi, we would have had a three-way tie at the top with Barcelona also at 7-3. The tiebreaker would have been complicated because Barcelona beat CSKA twice and Efes beat Barcelona twice. It would have gone to total point differential between the three teams, in which case, the winner would have been Barcelona at plus-14, followed by Efes at plus-four and CSKA minus-18.

We note, also, that while the top of the Euro Big Six standings show CSKA, Efes and Barça, in that order, the Euroleague standings have the very same top three, though leading with Barcelona and following with CSKA and Efes. Not only were the same three teams on top of both standings, but they, along with our lineal champ, Olimpia of Milan, were the Euroleague Final Four.

In the semis, Efes won the rubber game against CSKA, advancing to the Finals. Barcelona beat Olimpia. And, in the championship game, Efes defeated Barcelona for the third time in the season to win it all.

The pyramid is a regular season affair that doesn't include playoffs, so there's no reason to use playoffs to break pyramid ties. Regardless, Efes built a nice case for themselves in the postseason. 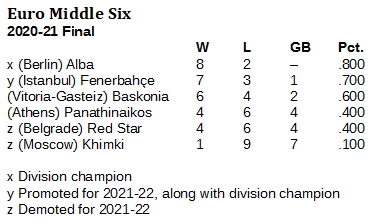 On top of the Euro Middle Six, we find Alba of Berlin, which, in two years of Euroleague licensing has won two pyramid divisions after capturing the Little Six last year. Alba finished 8-2 in the Middle Six, which is a pretty good trick, considering it was only 12-22 across the Euroleague. Fenerbahçe, which was just demoted to the Middle Six, is going right back to the Big Six as the runner-up to Alba.

Khimki actually is a little more than going down. They've lost their Euroleague status for a couple of reasons. Mostly, they didn't regain their berth from the VTB League, the top Russian basketball league. Second, a VTB team, UNICS from Kazan, won one of the EuroCup berths, so they will enter the Euro Little Six in Khimki's place. 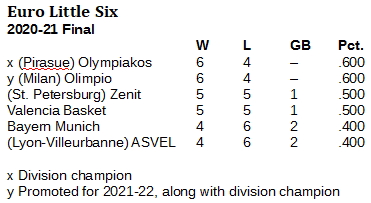 Olimpio also was a Euroleague semifinalist and the winner of the European lineal, so they're both legit promotions. The rest of the Little Six, though, was about as good and nothing was decided here until very late, as the whole division bunched within two games.