The Dallas Mavericks won eight games of the Western lineal basketball championship in 2020-21, twice as many as any other team. The Mavs moved up to fourth in the all-time standings. 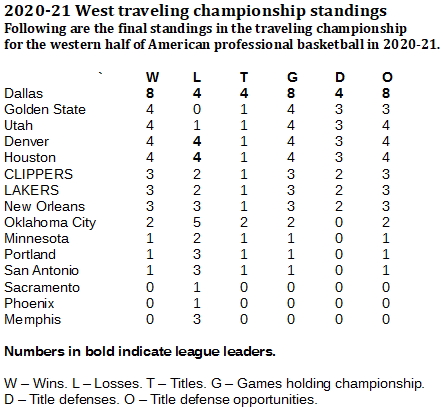 The Western lineal championship in pro basketball played out for only 38 games in 2020-21, with the Dallas Mavericks emerging as the top team with eight games of championship.

Outside of the Mavericks, this lineal was a balanced affair. The Denver Nuggets, Golden State Warriors, Houston Rockets and Utah Jazz all tied for second place with four wins each, while the Lakers and Clippers each had three.

Throughout the season, this championship got around and no one could defend it more than three times. The Mavericks, Nuggets and Rockets all were on four wins before the Mavs won at Denver, 116-103, taking the title and the lead with five wins.

In the next couple of weeks, the Mavs played for the championship six times and won only three of them. Included were back-to-backs against the Clippers and Portland in which Dallas lost the first game and won the second, taking the title to the next stop. The wins the Mavericks did get were enough to give them the season championship in West.

The Warriors still lead all-time in the Western lineal with 50 games of the championship since tracking began at the start of the 2015-16 season. With their 18 games of Western lineal in 2019-20, the Lakers have made a huge move in the last three years and now are tied for second all-time with the San Antonio Spurs at 29. The Oklahoma City Thunder is third with 26, followed by the Mavericks (24), the Utah Jazz (21) and the Clippers (20). 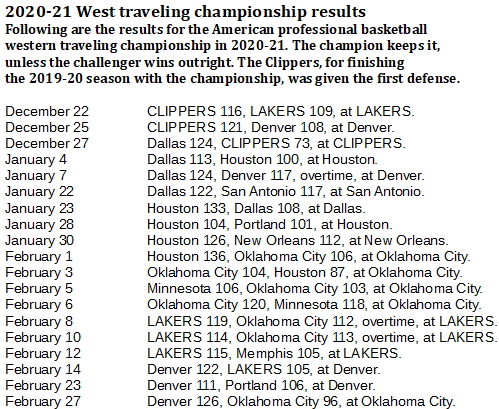 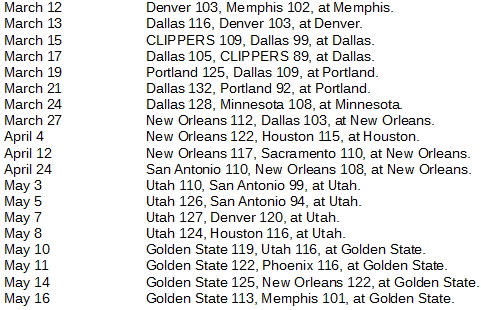