A late rally enabled the Miami Heat to take the all-time lead in the Eastern pro basketball traveling championship while denying the Atlanta Hawks a berth in the next Super League. 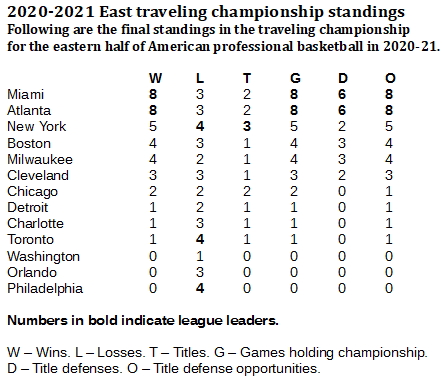 The Miami Heat produced two four-game championships in the Eastern pro basketball lineal chase for 2020-21, taking over the all-time lead in the standings for the East.

The Heat finished the season tied with the Atlanta Hawks on the top rung of the Eastern ladder with eight wins each. The Hawks produced a seven-game title that lasted for all of March and into April, then added one game of title in April, bringing their total to eight.

The Heat entered May with four games of championship, but the procured the title from Charlotte with a May 2 win on the road, then defended the championship three times, tying Atlanta at eight. The Heat went to Milwaukee on May 15 for a 122-108 loss, ending its reign. The season ended the next day with the Chicago Bulls defeating Milwaukee, so the Bulls take the Eastern lineal into 2021-22.

All-time, Miami's eight wins brought it up to 37, the most for the Eastern lineal since tracking began in 2015-16. The Toronto Raptors are in second place with 35 games, followed by the Bucks with 33 and the Indiana Pacers with 32.

The Hawks brought their all-time win total in the East to 21, still well down the standings. The Hawks would have qualified for the Super League if the Heat hadn't matched their win total. Undisputed lineal champs in basketball go to the Super League, but not teams that finish in ties. 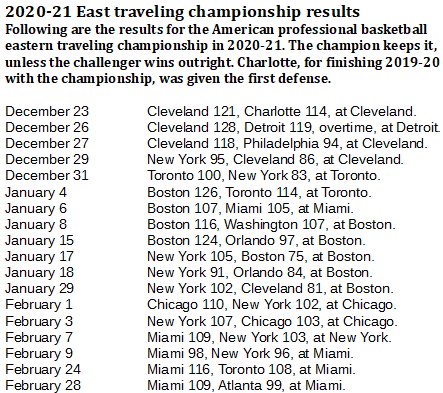 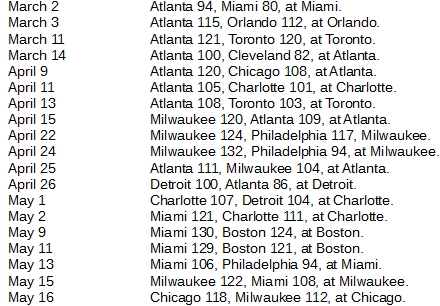