Juventus won its second consecutive Italian Big Six in 2019-20, and Atalanta was the runner-up for the second straight time. 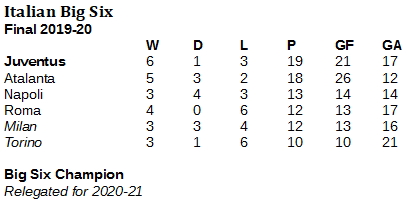 For the second straight year, Juventus won the Italian Big Six with some margin over Atalanta in 2019-20.

In fourth, we have a tie between Roma and Milan, and here we need to break the tie so the loser can be relegated.

Soccer took a leap forward going on 30 years ago, when three standings points for a win replaced two as the international standard. The idea was to make teams lay out for wins instead of settling for draws. Even those of us who consider a draw a satisfying result don't wish to encourage them.

One can see in the difference between Roma and Milan the difference it makes. Roma lost six of its ten games, and Milan lost only four of its ten. But Roma won every game it didn't lose, whereas Milan drew half of its remaining games. More wins is more glory. When we have a tie between two teams after the same number of games, we see if one of them has more wins before checking goal differential. By that reckoning, it's better to be Roma.

So, Roma will remain in the Big Six, while Milan will go down to the Middle Six. Also going down is the last-place team, Torino, which but for one more goal in a draw, would have been tied with Roma. 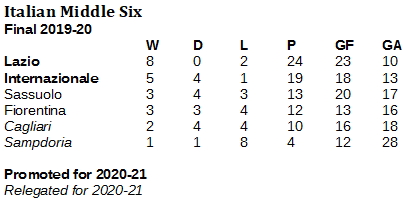 The top two teams in the Italian Middle Six are unusually strong. In most of the big European leagues with four Champions League berths, it is rare for two of those berths to come from the Middle Six. But that happened here with Lazio and Internazionale. Lazio, the second team in Rome, had a magical season going before covid stopped everything. Internazionale has yo-yoed every year from the Middle Six to the Big Six, back and forth.

No one else in the Middle Six came even close to contending. Cagliari and Sampdoria, the two teams furthest from the prize, will go down in 2020-21 to the Italian Little Six. 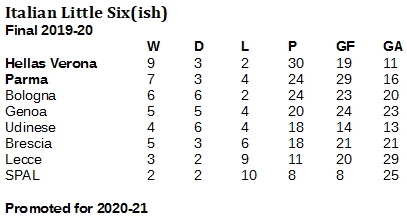 Hellas Verona finished at the very bottom of the Little Six(ish) in 2017-18 and was relegated out of Serie A for the following season. But Hellas was back in the Serie A fiercely in 2019-20, storming to the Little Six championship. Across Serie A, Hellas finished ninth, pretty good for a team freshly promoted.

So, Hellas will go to the Middle Six in 2020-21. Also moving up is Parma, which finished second in the Little Six.